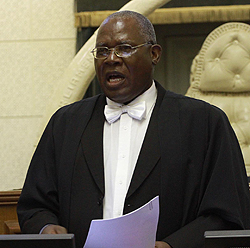 I HAVE been following with interest the number of conflictual and confusing articles and pronouncements in the print and electronic media on the important national topical subject of what the Constitution of Zimbabwe says about dissolution of Parliament and the date for the holding of a general election.
Some of these articles and pronouncements are uninformed and have the effect of misleading the public on the important national issue of elections. In this article, I explain in simple language what the Constitution says on the subject.
In doing so, I am aware that I will arouse and attract the interest, both positive and negative, of those who have been making pronouncements as well as readers. Indeed, I expect and welcome both reactions as my intention is that the discourse will educate and better inform the public.
Interpretation of the Constitution on this subject varies from those who argue that the deadline for the holding of elections is June 29, 2013, to others who conclude that elections can be delayed to the end of September or October 2013 or some time thereafter this year.
It is, therefore, necessary that we identify and closely examine the relevant provisions of the Constitution in order to reach clarity on the matter. This is necessary in view of the fact that the dissolution and date of elections are matters of public interest.
The relevant provisions of the Constitution for this purpose are sections 63 and 58 in that order. In interpreting these provisions on dissolution and elections, I may refer to other sections of the Constitution.
Section 63 of the Constitution states that:

(2) Subject to the provisions of this Constitution, the President may at any time dissolve Parliament.
(4) Parliament, unless sooner dissolved, shall last for five years which period shall be deemed to commence on the day the person elected as President enters office in terms of section 28(5) after an election referred to in section 28(3), or shall then stand dissolved: Provided that, where the period referred to in this section is extended under subsections (5) and (6), Parliament, unless sooner dissolved, shall stand dissolved on the expiration of that extended period.Advertisement

“58    Elections
(1) A general election and elections for members of the governing bodies of local authorities shall be held on the day or days within a period not exceeding four months after the issue of a proclamation dissolving Parliament under section 63(7) and, as the case may be, the dissolution of Parliament under section 63(4) as the President may, by proclamation in the Gazette, fix.”

Having cited all the sections of the Constitution relevant to the life of Parliament, its dissolution and the fixing of a date for the holding of general elections, I will now explain, step by step, what these sections mean. This is in order to clarify for the public the issue of the date for the holding of elections.
# Subsection 63(2) states that the President can at any time dissolve Parliament and, on this, there is no disagreement.

and
“158     Timing of elections
(2)    (1)    A general election must be held so that polling takes place not more than—
(3)        (a)    thirty days before the expiry of the five-year period specified in section 143;”
Unless amended to provide for dissolution and the holding of a general election under the current Constitution, the new Constitution would require the President to dissolve Parliament thirty days before the expiry of its term.
The question is whether there is a constitutional option to hold a general election later than end of June 2013. The simple answer is “Yes”, provided Parliament amends the Constitution to create a third exceptional circumstance for the extension of the life of Parliament after the expiry of the five-year life of the Seventh Parliament in addition to subsections (5) and (6) of section 63.
Austin Muranganwa Zvoma is the Clerk of the Parliament of Zimbabwe. He has served in this capacity since November 1, 1989