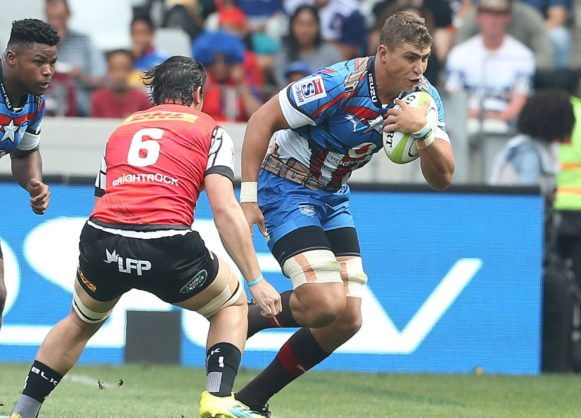 FORMER Zimbabwe rugby youth international Eli Snyman has made a massive lead in his fledgling career after sealing a move to English Premiership side Leicester Tigers from Italian club Benetton Rugby.

The 24-year-old towering lock, who attended St John’s College in Harare, has been based in Italy since 2019 when he left South African side Bulls.

In his debut season in Italy, Snyman, featured 22 times for the PRO14 side which reportedly caught the attention of Leicester Tigers head coach Steve Borthwick. At Benetton, Snyman was teammates with fellow Zimbabwean and now Italian international Sebastian Negri.

Discussing his move to Tigers, Snyman said he was “excited” about linking up with his Leicester team-mates under Borthwick’s leadership.

“Speaking with Steve, I am really excited about his vision for the club and I have been following the games so far this season and it has been great to see the team doing well, it’s exciting to know I will be a part of it,” he said in an interview with Leicester Tigers’ official website

“When Steve speaks, you know he is a good leader and you want to follow him.”

When asked about what he will bring to the Tigers squad, Snyman added: “I am all about the guys around me and a hard working player, who shuts up and gets on with the job.”

“I take a lot of pride in the set piece and am looking forward to playing my role in the Tigers team.

“I am expecting a physical game in the Premiership and looking forward to it.”

“I’m very grateful to the club for the opportunity it has given me over these two years,” said the 25-year-old.

“It has not been any easy season from a sporting point of view due to various circumstances.”

The 24-year-old Harare born player has been on a steady rise since his move to South Africa six years ago, initially rising through the ranks at the Bulls to establish himself as one of the Pretoria franchise’s rising stars before making the move to Europe.

Snyman was vice-captain of the Zimbabwe Under-18 squad which took part at the 2014 edition of the annual Coca-Cola Craven Week tournament held in Middelburg, South Africa.

His performances during the week-long annual event attracted the attention of the Bulls franchise, who awarded him a scholarship to study and play rugby at the University of Pretoria.

Snyman was named vice-captain of the Pretoria-based franchise’s Under-19 side in his debut season before being named the 2015 Blue Bulls Under-19 Forward of the Year at the club’s end of year awards at Loftus in Pretoria.

The talented player turned down a call-up to the Zimbabwe Under-20 side before being selected for South Africa’s Under-20 squad for the 2016 World Rugby Under-20 Championship held in Manchester, England, where he featured in all their matches.

Snyman has reportedly set his sights on following in the footsteps of legendary Zimbabwe-born players such as Bob Skinstad, Tendai Mtawarira, Adrian Garvey and Tonderai Chavhanga who have played for the Springboks.