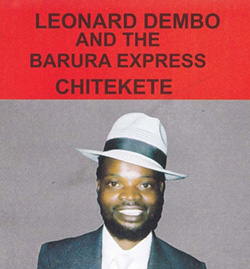 EVERY year Zimbabwe is awash with both new artistes and new music which change the sound of radio.
But there comes a time when fans would like to look back and reminiscence on yester-year albums that where ground-breaking and left a distinctive sound in their ears. In this case they will be celebrating an album’s special anniversary.
For Zimbabweans, one of the few albums that deserve an anniversary celebration is Chitekete by the late Leonard Dembo.
The album was released 25 years ago (1991) and went on to sell over 100,000 copies – a certified diamond feat which had only been achieved by The Devera Ngwena Band in the 1980s. If it was in the western world such an album on its anniversary would be celebrated with a reissue.
Iconic albums that celebrated 25th anniversaries worldwide include Michael Jackson’s Thriller (2008), the greatest album of all times, followed by Bad (2012). Tupac’s All Eyes on Me (2013), Paul Simon’s Gracelands album (2012) and many others. All these were celebrated with a reissue of the album.
Chitekete a is a rich album which was expertly produced and mastered. It contains a number of Dembo’s memorable hits, no wonder it became such a huge success and, up to this day, it enjoys considerable airplay on radio, in bars, parties and weddings alike.
There is no doubt that Dembo and his band and the producers worked hard to place this album in the history pages.
The title track with the same name and the most popular on the album was the signature tune at the Miss Universe pageant in Namibia in 1996. On this occasion hard work was rewarded.
The album carries 5 songs which include the title track, Chitekete, Sarura Wako, Chinyemwe, Tamba Yako Nditambe Yangu and Ndozvireva Kunani?
However, despite its popularity, Chitekete has its critics. Perhaps the most repeated criticism is the length of the songs, especially the title track which is about 14 minutes long. Ultimately though, Dembo’s incredible gift carries the day despite the criticism.
In Zimbabwe, Chitekete is widely recognized as one of the most important records of any era in Sungura and its influence has been felt ever since that day 25 years ago when it hit the stores.
The title track was, in 2005, accorded the Silver Jubilee Award for best song in the same year Zimbabwe celebrated 25 years of independence from Britain.Advertisement

Dembo passed on in April 1996, but his music lives on. For now, it’s time to sit back and listen to the album and, by the way, where were you when this album was released?
Farai Chirimumimba holds a BSc Honours Music and Musicology degree from Midlands State University and is a freelance journalist based in South Africa. He can be contacted on chirimumimbaf@gmail.com.