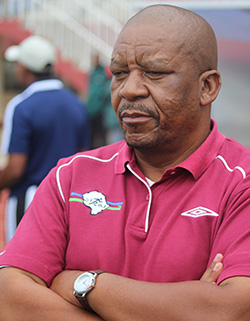 IT’S now all set for Sunday’s showdown in Maseru between Zimbabwe and Lesotho as the Warriors bid to preserve their lead when the two Southern African nations clash in the second leg, final qualifier of the 2016 African Nations Championships (Chan).
The Warriors, who left for Maseru on Friday, are leading 3-1 from the first leg played at Barbourfields on Sunday and need to avoid a 2-0 loss to go through to their fourth consecutive Chan finals, having made appearances in 2009 (Ivory Coast), 2011 (Sudan) and 2014 (South Africa).
Lesotho coach Seephephe Matete is not throwing in the towel and believes his charges can overturn the 3-1 loss they suffered against the Warriors on Sunday.
Matete insists with the right attitude, Likuena can beat the Warriors in the return leg set for Setsoto Stadium and qualify for the 2016 African Nations Championship (CHAN) in Rwanda.
“We have not lost hope; football is a game of surprises and you never know what will happen until the final whistle,” Matete told the Lesotho Times on Tuesday.
“We have to go all out on Sunday and be very offensive from the word go and score the goals we need to qualify for Rwanda.”
Matete strongly feels his team was unlucky to lose the first leg match despite being the better side on the day.
A loss to the Comoros five days before in a World Cup qualifier did not help matters as the defeat left his players “very demoralised”, Matete added.
“We played very well considering the difficult circumstances we were under,” he said.
“We were just coming from a loss to the Comoros, which took its toll on the players, but they still showed character in Bulawayo.
“We were the better team until the home side scored a penalty and thereafter, it was very difficult for us.
“We had chances of our own and once again, squandered them and could not get back into the game.”
While he is bullish about Likuena’s chances in Sunday’s reverse fixture, Matete also admits the match would be “very difficult” as Lesotho need to score two goals without conceding to win the match on the away goals rule.
“I think we have the capacity to score the two goals and win the match, but it will not be easy because of a combination of factors,” Matete said.
“Zimbabwe can be beaten because I feel they were helped by home-ground advantage as their supporters were really behind them.Advertisement

“Unfortunately, we don’t get that kind of support playing at our home-ground because our very own people always turn against their own players when the game is not going our way.
“Our supporters make life very difficult for their own players; they boo them instead of cheering when things are not going well and that kills the boys’ spirits. They now feel it’s better playing away from home than at Setsoto.
“That’s why I am appealing to the fans to change their mentality and support Likuena during both the good and bad times.
Warriors Probable X1: Donovan Bernard, Hardlife Zvirekwi, Ocean Mushure, Teenage Hadebe, Lawrence Mhlanga, Nqobizitha Masuku, Danny Phiri (c), Bruce Kangwa, Marshall Mudehwe, Knox Mutizwa, Roderick Mutuma