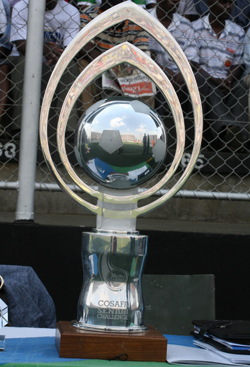 AFTER seeing his team cause a major upset by eliminating Angola from the Cosafa Senior Challenge on Sunday, Lesotho coach Leslie Notsi believes his men are more than capable of upstaging Zimbabwe when the two teams meet on Wednesday.
The semi-final clash at the Levy Mwanawasa Stadium in Ndola, Zambia, will decide who reaches the final.
Lesotho beat Angola 5-3 on penalties after they fought back from a goal down to be level 1-1 in injury time, a day after Zimbabwe beat Malawi 3-1 on penalties. The match had ended 1-1 after regulation time.
After reaching their target – their first ever semi-final – Notsi believes they are more than a match for the defending champions.
“Our target was to reach the last four and we have managed to do that. Anything else will be a bonus to us and I’m happy that the boys are even more confident than ever that we will beat Zimbabwe on Wednesday,” he said on Monday.
“We have seen their type of play and we know they want to knock the ball around, but we have a strategy to counter that, so we know what to do in the match. We will be playing on a artificial turf which is best suited for us.
“I have respect for the defending champions but I believe my boys want to leave the tournament with some bit of history and if luck is on our side with the trophy.”
Lesotho have already received R15,000 for being the highest scorers in the group stages and even if they lose to Zimbabwe, they will still contest the third and fourth place play-off on Saturday against the losers between South Africa and Zambia, who clash in the other semi-final on Wednesday.
Zimbabwe struggled against Malawi even with a one man advantage after the Flames’ James Sangala was red carded in the 44th minute.
Without influential stars like Patson Jaure, who was overlooked in favour of Eric Chipeta and Ali Sadiki, who was made to sit on the bench, the Warriors failed to bury the numerous chances they
created on Saturday from free kicks.
Masimba Mambare, who is the captain at the tournament, scored Zimbabwe’s goal in the 14th minute but the Warriors were pegged back when Douglas Chirembo’s shot was helped into the nets by Warriors keeper Max Nyamupanendengu two minutes from time.Advertisement