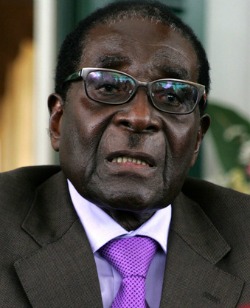 THIS article analyzes the removal of Robert Mugabe in the context of the strength of the opposition, suggesting a correlation between a severely weakened opposition and the removal of the nonagenarian dictator. It builds on previous writings which assert that Robert Mugabe’s incumbency aided the opposition’s messaging and recruitment. This article argues the converse; that a strong opposition was central to Robert Mugabe’s claim for perpetual legitimacy as the vanguard of the struggle against neo-colonialism and imperialism. Without a vibrant personification of the abstracts he purported to defend his party and country against, the stage was set for creation of the critical consensus necessary for his ouster.
In this analysis, strength of the opposition is measured on three bases: its representation in arms of the state (political representation), its internal cohesion (operation as a singular coherent unit) and its external reach (human and geographic scope and sphere of influence). Since the ultimate form of political power stems from incumbency, strength of the opposition is based on its relative distance from and involvement in incumbency.
A strong opposition has so much political representation, internal cohesion and external reach that it has to be included in governmental decision making. A weak opposition is divided, fragmented, has little political representation and can thus be ignored by incumbents. The term ‘opposition’ will be used interchangeably with its biggest formation, the Movement for Democratic Change (MDC). The term ‘MDC’ is used in reference to both the pre-2005 party and post-2005 formation led by Morgan Tsvangirai.
The removal of Robert Mugabe from the presidency occurred when the MDC was arguably at its weakest since its formation in 1999. The MDC has enjoyed two periods of relative strength (2000 – 2004; 2008-2012) and two periods of relative weakness (2005-2007; 2013 –2017). From 2000 -2004, the MDC had high cohesion as the main opposition party. It used its extensive reach to defeat ZANU PF in a constitutional referendum in 2000 and to win almost half the parliamentary seats on the ballot in the same year. This resulted in relatively strong political representation, sufficient to stop ZANU PF’s habit of routinely amending the Constitution.Advertisement

The next period of relative strength was after the success of the 2008 Harmonized Elections. The MDC won a narrow majority in parliament, enabling it to select the Speaker of Parliament. Through the Global Political Agreement (GPA), they secured a share of executive authority and thus had a voice in all significant governmental decision making.
The period of 2005-2007 was the first period of relative weakness for the opposition, beginning in 2005 when the MDC won 16 seats fewer than in 2000. ZANU PF restored the two-thirds majority it needed to continue amending the Constitution, and quickly obliged by enacting the 17th Amendment to the Constitution. This amendment included a re-introduction of the upper house of parliament; the Senate.
Ironically, it would be the decision over whether to participate in the senate elections which was the ostensible reason for the first major split in the MDC in 2005, leading to significant loss of reach and cohesion. The MDC still retained a modicum of strength through its decision not to expel its former members from parliament. Thus, they engaged in negotiations with ZANU PF for free and fair elections and agreed on various reforms including the 18th Amendment to the Constitution and a draft constitutional text (the Kariba draft).
This is a far cry from the period of 2013 to 2017, during which the opposition has been at its weakest. The MDC is represented in parliament, but lacks sufficient numbers to stop any constitutional amendments as shown by their futile opposition to the First Amendment to the Constitution of Zimbabwe (2013). It suffered yet another split in 2014, losing further cohesion and reach. To make matters worse, the magnanimity of 2005 was cast aside and erstwhile colleagues were expelled from parliament. The decision to boycott the resultant by-elections handed what little initiative they retained back to ZANU PF.
Without the clout of any significant political representation and having lost further cohesion and reach, the MDC resigned itself to being a political by-stander. It is not engaged in any political negotiations with the incumbents in spite of incessant calls for dialogue. By its own admission; the MDC’s overtures to President Mnangagwa prior to the formation of his new government received no takers. It is in this context that opposition alliance building has done little to increase its strength. Lack of cohesion has led to the creation of at least three alliance platforms, each made up of political formations which, outside of the MDC, lack political representation and have very limited reach.
When the opposition has been relatively weak, ZANU PF has been forced to confront its internal challenges; with the raw aggression and opprobrium normally reserved for the opposition delivered to its own party members. On the other hand, a stronger opposition has tended to galvanize ZANU PF into a more internally cohesive but outwardly aggressive unit. For instance, the loss by the MDC in the 2005 General Elections enabled ZANU PF members to retreat into entrenched zones of factionalism, culminating in the bhora musango strategy of ZANU PF members campaigning and voting against Mugabe in 2008. Whilst this was made worse by the 2004 Tsholotsho Declaration and its failure to elevate now President Mnagangwa to the presidium, it is still emblematic of how a weak opposition resulted in a less cohesive ZANU PF.
The strong showing by the opposition in 2008 had the reverse effect, bolstering internal unity within ZANU PF. Rallying around an anti-sanctions and bhora mugedhi rhetoric, ZANU PF campaigned for their troubled leader and went as far as to dismiss allegations of factionalism as false. This would change dramatically after their mammoth victory in 2013. Factionalism was not only publicly acknowledged, but used as the basis to purge party members; first those aligned to then Vice President J.T.R. Mujuru and later those aligned to then Vice President E.D. Mnangagwa. Though publicly extolled, the former President’s advanced age and the increasing role of his wife were shown to be ZANU PF’s version of the emperor’s new clothes; embarrassing realities which could only be confronted in a context in which there was no fear of an opposition take over.
A weakened opposition did not cause the ouster of Mugabe, but it certainly aided it. As the adage goes: correlation does not mean causation – but does not mean there is no correlation. A stronger opposition would have been the subject of ZANU PF’s hostility, raw aggression and vitriol. It would have had a bigger say in the entire scheme to remove Mugabe, more so if its political representation granted it the capacity to veto it, and its external reach enabled it to mobilize regional support against it.
More importantly, it would have given credence to accusations from Mugabe that any attempts to oust him were inspired by neo-colonial elements attempting to hand power to the British; an argument which became moot once ZANU PF became so dominant that it could effect a reset without the opposition’s involvement. This strongly suggests that Robert Mugabe’s own claim to legitimacy as the leader of ZANU PF relied, post 2000, on the existence of a strong opposition which personified the vaunted danger he claimed to be guarding against.
Without such a vibrant opposition, the necessary miscalculation of targeting then Vice President E.D. Mnangagwa and his military allies allowed for a consensus which would have been well-nigh impossible to muster during a period of opposition vibrancy. This harkens to the 2008 MDC slogan of “Morgan is more,” as it turns out, less is more.