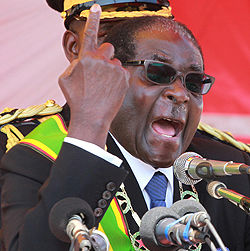 Zimbabweans at home and abroad celebrated gloriously from the moment Robert Gabriel Mugabe’s belated resignation ended his 37 years of misrule. But University of South Africa doctoral candidate Enock Mudzamiri’s cautionary note bears heeding: don’t trust the military replacement for the 93-year old Machiavellian; don’t forget that intra-party fighting for the spoils instigated the end of Mugabe’s rule.
There is an even more comprehensive way to examine Mugabe’s legacy and to think about how to work beyond it. Historian and decolonial theorist Professor Sabelo Ndlovu-Gatsheni’s take on “Mugabeism” can help.
Mugabeism is a system of ideology and practice finely honed during almost four decades of Mugabe’s reign over Zimbabwe’s party-state complex. It constitutes a constant combination of coercion and consent, from force and fraud to chicanery and compulsion.
It is all-embracing and insidious, running through the military and the media and even the songs and dances of Zimbabwean society. Mugabeism is almost a culture, imbricated deeply in the multifaceted and deep crisis in the kitchen coup that almost escaped the confines of Zanu-PF itself.<a href=”https://pubads.g.doubleclick.net/gampad/jump?iu=0&sz=1&c=234″ target=”_blank”><img src=”https://pubads.g.doubleclick.net/gampad/ad?iu=0&sz=1&c=234″ border=”0″ alt=””></a>
Yet there is a small dimension to Mugabeism that has positive attributes. The words that evoke this dimension include liberation and freedom – positive attributes that need buttressing by democratic forces outside Mugabeism’s closed circle.Advertisement

Bear in mind that countries – including many in Africa – have moved towards democracy incrementally. They have zig-zagged and sometimes regressed. Not all of this activity can be dismissed as window-dressing.
Zimbabwe’s coup, or non coup, should be seen in this light. The question is: at the core of Mugabeism, can one see contradictions that can spell transformation out of today’s militaristic morass?
The answer is mostly no – due to its inextricable intertwining with the man himself. But those elements tied to more conventional ideas of democracy and reconciliation have been relevant during the past tumultuous days.
At one level, we cannot forget that a level of democratic discourse has infiltrated the Southern African Development Community and the African Union. Many years of dealing with coups and their consequences have taught these organisations – shambolic as they are – that coups should not be encouraged. A “real” and very bloody coup would not have been recognised, and Mugabe knew this. The military men had to feint their way to regain their position at Zanu-PF’s head. They came very close to blowing it.
At a more local level, it was the humiliation of a parliamentary impeachment that forced Mugabe’s hand. This dovetailed with the neighbours’ constraints. The crafters of the 2013 constitution with rules for impeachment in Section 97, should take a bow. Without it, worse would have happened to the democrats in parliament and civil society on the streets.
Mugabe probably thought he could foil Zanu-PF’s rather messy attempt to dump him, but the next step was too hard to fathom. Could it have been, too, that the friendly guitarist from north of the Zambesi had a big role to play: Kenneth Kaunda had accepted his denouement by election as long ago as 1991.
The issue of unity
A problematic element of “Mugabeism” is the question of “unity”. It’s not an easy one in a society riven by ethnic, class, and generational divides.
Perhaps we can give Mugabe the last word on this given his utterances made in near desperation after his party threw him to the wolves. While he studiously ignored the issue on everyone’s mind – resigning – he invoked “comradeship and collegiality”.

The way forward cannot be based on swapping by cliques that ride roughshod over party rules and procedures.

The party must go “back to the guiding principles … of traditions … served by successive generations who have shared ideals and values which must continue to reign supreme in our nation”. A “new ethos” too, could be “nourished by an abiding sense of camaraderie” that just might override the recent “era of victimisation and arbitrary decisions”. He zoomed in on one that had created the tensions between the G-40 – his wife Grace Mugabe’s faction – and Lacoste, the faction behind the man chosen to succeed Mugabe, Emmerson Mnangagwa:

our inter-generation conflict must be resolved through a harmonised melding of old established players as they embrace and welcome new ones through a well-defined sense of hierarchy and succession.

Therein is buried a nutshell of tensions: old traditions of suppression jostled with the ways in which new political pretenders could be accommodated.
Mugabe’s key problem was thus revealed: he had wrapped up the party and state on his own person to the extent that he thought neither would survive without him. On the cusp of recall over the weekend, Mugabe was not going anywhere. He felt that after him the storms would be unleashed. This of course is the conundrum of a politics wherein the man appears to be the state and vice versa. Mugabe thought only he could resolve the tensions of the last few months, ensuring “no bitterness or vengefulness” to mar “our hallowed ideas of reconciliation”.
If, he said, in the 1980s Zimbabweans could reconcile with “those who oppressed us … surely this cannot be unavailable to our own … we must learn to forgive and resolve contradictions real or perceived in our Zimbabwean spirit.”
Yet he forgot that the spirits of reconciliation and revenge at the heart of Mugabeism, and his incarnation of these, were never resolved.
Dealing with dissent
The intervening years have borne much of Mugabe’s ideology of dealing with dissent. But this time, axes were not invoked as directly as before.
The roots of the faction fight that led to a very old crocodile taking the throne were not resolved by Zanu-PF’s old guard embracing and welcoming the new contenders for power. The forgiveness and reconciliation, with no bitterness or vengeance did not happen within his discourse. It took the democratic phase – in this case parliament, augmented by civil society on the streets – to push the progressive elements within Mugabeism. It bears noting that these elements had to leave the party’s shell. If anything is clear at this moment, it is that Zimbabwe’s problems cannot be handled within the confines of a single political party.
Zanu-PF cannot pull off the unfulfilled dimensions of Mugabeism. When the state is the man and that man is Mugabe, it is all too possible that the new man will take all. The problems of absolute power loom. Yet Zimbabwean society has become more complex as years of democratic struggle have left their trace. This is the moment to push them into the era that began with Mugabe’s fall. If they are not at the forefront now, the old patterns of militaristic Mugabeism will win once again.
David B. Moore