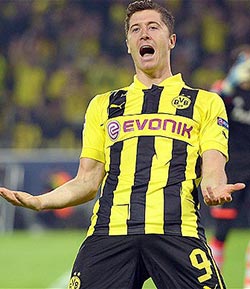 IN another heart-breaking move for Dortmund coach Juergen Klopp, the Bundesliga’s leading scorer Robert Lewandowski signed a five-year contract with the current world, European and Bundesliga champions.
The 25-year-old will see out the rest of his contract with Dortmund, which runs until the end of this season, before joining Bayern on July 1, the Bavarian club said in a statement.
“We are satisfied that this transfer has gone through,” said Bayern’s chief executive Karl-Heinz Rummenigge. “Robert Lewandowski is one of the best forwards in the world, and he will strengthen the Bayern squad.”
Rummenigge later told Bayern Munich TV that fellow striker Mario Mandzukic would also remain at the club next season despite the arrival of Lewandowski.
Last April, Mario Goetze, one of the jewels of Dortmund’s youth academy, also left for Bayern in a shock 37 million euro deal that the supporters have barely digested.
Lewandowski’s departure did not create the same shockwaves in Dortmund as it had been expected for a long time but it is still a bitter pill for Klopp and baffling for their fans.
Dortmund have one of the most loyal set of fans in Europe with about 80,000 regularly filling their stadium, including the 25,000 who pack the famous Suedtribune’s standing area.
Lewandowski’s move to Munich will add to concerns about Bayern’s growing dominance in Germany.
They won the Bundesliga by a massive 25-point margin from Dortmund last season and lead this season’s championship by seven points at the halfway mark with an unbeaten record.
The clinical Poland international will have to battle for his place as Bayern tend to field only one striker at most, with Croatia’s Mandzukic the favoured choice at present.
While Bayern have continually strengthened their squad in the last few seasons, Dortmund have lost several top players, including Japan’s Sinji Kagawa who joined Manchester United.
Like Goetze, Lewandowski was instrumental in helping Dortmund win successive Bundesliga titles in 2011 and 2012.
However, he made it clear in September that he wanted to join Bayern and a move was widely seen in Germany as just a matter of time.
Lewandowski fell out with Dortmund’s bosses over his failed attempt to join the treble winners in the close season but later said ties with the club had been mended and accepted the fact he would spend one more season there.Advertisement

Lewandowski, whose pace and control make him perfect for Dortmund’s high-tempo game, has scored 11 league goals so far this term. He was the Bundesliga’s third-highest scorer with 22 in 2011/12 and second in the scoring charts with 24 last season.