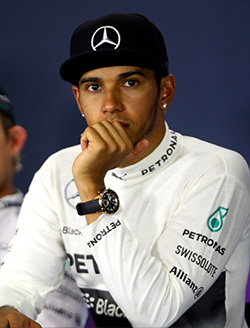 LEWIS Hamilton has suggested he is mentally tougher than Mercedes team mate Nico Rosberg and questioned how hard the German really tried to beat him in last weekend’s Chinese Grand Prix.
In comments that will do little to ease tensions between the pair ahead of Sunday’s Bahrain Grand Prix, the double Formula One world champion also told British reporters that he was more of a racer than his rival.
“I’ve always said he is really strong mentally,” Hamilton was quoted on Tuesday as saying. “But I’d like to think I’m stronger this year.”
The Briton has won eight of the last 10 races, beaten Rosberg in nine of them, and started all three Grands Prix this season from pole position.
The tension between the two, evident last year as they battled for the title, flared up again in Shanghai when Rosberg accused Hamilton of compromising his race by driving selfishly slow and leaving him exposed to the Ferraris behind.
In the end they finished one-two for the second time in three races.
Although the drivers cleared the air afterwards at a briefing that Rosberg described as ‘constructive’, newspapers on Tuesday quoted Hamilton as saying the German should simply have been more competitive.
“Nico didn’t try,” he said, repeating the words for effect.
“They said maybe he was just comfortable with second and I said ‘well, that’s the difference between us. I want to win always’.
“And I would have done everything to get past. Or at least pushed for three laps. He wasn’t quick enough.
“I want the guy to be up my a*** if he’s got the pace, up my a*** and putting pressure on me. And if I can’t defend it, you lose it.”
Rosberg had explained that he risked wrecking his tyres by attacking but Hamilton, who ultimately set the fastest lap of the day, found support from his Mercedes bosses for his management of the race.
Advertisement