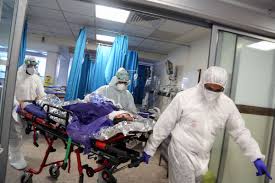 STASTISTICS show that Covid-19 accounted for 50% of the decline in life expectancy in the United States between 2020 and 2021.

Unintentional injuries – a term which also includes drug overdoses – reached record highs in 2021 and contributed to 15.9% of the decline.

The fall in US life expectancy was particularly pronounced among Native Americans and Alaska Natives.

Since 2019, life expectancy among this demographic has dropped by 6, 6 years, more than twice that of the wider US population.

A separate set of 2020 data released last week also showed significant geographical differences across the country. Life expectancy in Hawaii is the highest at 80, 7 compared to 71, 9 years in Mississippi.

Life expectancy in the US is among the lowest of developed nations around the world.

According to the latest available statistics from the World Bank, Hong Kong and Japan have the world’s highest life expectancies at around 85 followed by Singapore at 84.

Life expectancy in countries including Switzerland, Australia, Norway hovers at around 83.