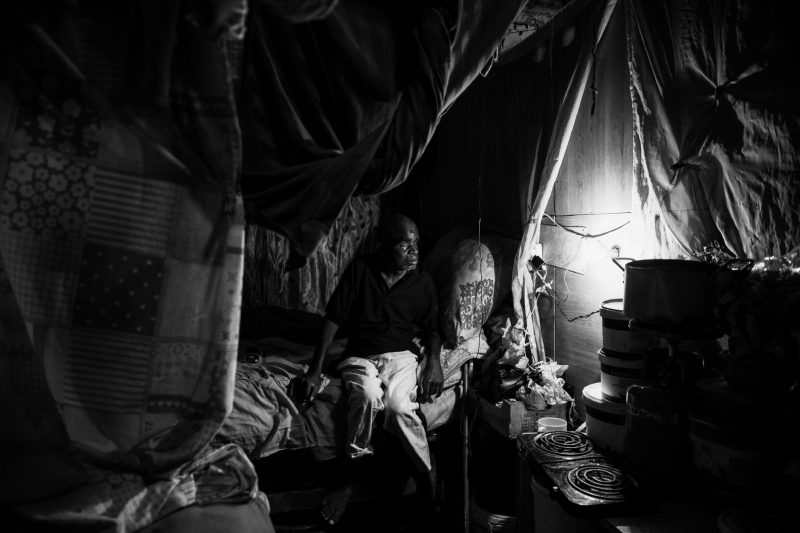 Edmore Machingura in his room in one of Johannesburg’s dark buildings. Until recently he begged for a living, but had to stop because of poor health. His daughter Eugenia (20) looks after him now.
Spread This News

SITTING on a pavement in Raleigh Street, Yeoville’s main street, with late-afternoon foot traffic bustling past him, Gift Mupambiki seems unperturbed by the noise around him as he jams on his keyboard.

Despite the incessant hooting of cars and taxis and the commotion of daily life and passers-by, Mupambiki’s repetitive electronic melody is clear. Nearby, a group of men come out of a tavern to watch him play. Most people just pass by, but the occasional child accompanying a parent, unable to contain their curiosity, tries to stop, briefly, to listen.

Mupambiki has been coming to this spot near the library almost every day for years. Blind in both eyes, face mask pulled up to almost cover his eyes, he plays his upbeat keyboard melodies and hopes for some money to be dropped into the tin cup in front of him. His jamming, combined with begging, is how he has been earning a living on the streets of Johannesburg for more than a decade.

Originally from Masvingo in Zimbabwe, Mupambiki encountered many other blind Zimbabweans in Johannesburg after a friend from back home encouraged him to come to South Africa. “I’m trying to raise money to go back to school and finish my studies. I was busy doing an honours in special needs education, but I ran out of money,” he said during a break from his playing.

From his regular spot on the pavement in Yeoville, it’s only about 2km away to the dark and dilapidated building in the Johannesburg inner city where he lives with dozens of other blind Zimbabwean migrants.

John Zindandi (38) regarded as a leader in this community, has been living there since 2010. He has been in South Africa for even longer, but lived in the Central Methodist Mission in the Johannesburg CBD for a period following the violent xenophobic attacks of 2008 in which more than 60 people were killed.

“I normally survive through begging. These days are tough, man,” Zindandi said. For most of 2020, he and compatriots in this building — and others like it — have struggled to survive as Covid-19 and the lockdowns have restricted their movements.

“It’s very tough. We don’t have anything, and we don’t have anybody helping us,” he said. Adding to his difficulties is the fact that, due to the pandemic, motorists are more reluctant to open their car windows to interact with street beggars or give them money.

Research by the African Centre for Migration and Society (ACMS) at Wits University has shown that the majority of blind beggars on the streets in Gauteng, as well as women begging with children, are migrants from Zimbabwe.

According to the research document, “The phenomenon of street begging by migrants with disabilities was described as very common and easily detectable in most South African cities, yet they are regarded as a hidden and hard-to-reach population.”

Edmore Machingura in his room in one of Johannesburg’s dark buildings. Until recently he begged for a living, but had to stop because of poor health. His daughter Eugenia (20) looks after him now.

Migrants are excluded from grants and other assistance from the South African Social Security Agency (SASSA), and even in cases where refugees and permanent residents do meet the requirements for assistance, they still struggle to get help.

The report found that “given the exclusions and vulnerabilities that they face around access to social protection schemes, respondents indicated that most migrants with disabilities depend on non-profit agencies and street begging for social and food assistance”.

It further found that the Covid-19 pandemic had exacerbated the impact of this exclusion on migrants with disabilities, regardless of their documentation status in the country.

A case in point is another of the building’s inhabitants, Margret Maushe (35). She spends much of her time begging near the trendy Maboneng precinct on the south-eastern side of downtown Johannesburg, and does so unaccompanied by her children. Also from Masvingo, she was born with a large hump on her back — possibly kyphosis, colloquially known a roundback. She doesn’t know the official diagnosis of her disorder, referring to it simply as a rutsinga — a Shona word that roughly translates to “lump on the back”.

As a child in Zimbabwe, she was diagnosed with cancer and had to have her left leg amputated when she was 12 years old. “Because of the amputation, I had to drop out of school in Grade Five. After that, even my friends didn’t understand or support me. It was really difficult to make friends,” she said.

Now living in a building with no running water or toilets, and sporadic electricity supply, Maushe and her husband, Tafadzwa Munyiki, who is visually impaired, easily navigate the building’s small, dark corridors and staircases with missing steps.

Maushe and her husband have to raise their three children on the little they make from begging or selling beers to their neighbours in the building. Their middle child, Thabile, 9, is also visually impaired and has a mental disability. None of their children were going to school at the time of the interview, and the family was hoping to send Thabile back to Zimbabwe to attend a school for children who are blind.

Maushe, who came to South Africa with an asylum-seeker’s permit that has since expired, says life as a migrant with disability is tough. “I’ve got a lot of problems when I go to the hospital. I can’t get help because I don’t have papers. Then there is also the issue of money,” she said through an interpreter.

“The other big problem is that the kids don’t go to school,” she said. She wanted to send her son to a school for blind children in South Africa, but their lack of legal documentation makes it difficult to find a school that would accommodate him.

Many Zimbabweans like Maushe are undocumented. Some came to South Africa, applied for and were granted asylum-seeker status, but their permits expired and they were not able to get permanent permits. Many others entered South Africa illegally, making access to services even harder.

Matthew Wilhelm-Solomon, a lecturer in anthropology at the University of the Witwatersrand and an associate researcher at the Migration and Health Project Southern Africa, has extensively studied the building where Maushe lives, as well as other similar buildings.

“I think many of the networks among blind, or otherwise disabled, migrants in Johannesburg are a continuation of communities formed in Zimbabwe.” Many connections were made in schools or workshops there, he explained.

“In particular, there is the Margaretha Hugo School for the Blind near Masvingo. It was formerly a Dutch Reformed Church mission school, and many blind students from all over Zimbabwe studied there. So there are very strong diasporic networks originally created in Masvingo.

“When people come to Johannesburg, they often know each other through these networks.” The networks can be intergenerational, and connections are made through personal and phone contacts. That’s why the blind community often lives in specific buildings, because when a newcomer arrives in Johannesburg they know they will get help from the community there.

Wilhelm-Solomon said the living conditions of blind migrants and those who have disabilities are not dissimilar to those faced by other poor and working-class South Africans, where water, electricity and sanitation are provided sporadically.

“A key thing is the real difficulty for blind and otherwise disabled migrants in accessing decent low-cost accommodation in Johannesburg. It’s already extremely difficult for undocumented migrants or even asylum seekers to access formal accommodation because of lack of bank accounts and permanent employment, as well as xenophobia.” This is amplified by being blind because high levels of discrimination towards blind people and people with disability exist in any case, he said.

“Many landlords won’t even take them as tenants, which means they are often forced into living in unlawful occupations, or alternatively in very overpriced, very poor living conditions. This is a widespread problem for both low-income South African and foreign national residents of Johannesburg.

“That’s why blind, or otherwise disabled, migrants from diasporic communities often find one another and help one another to find accommodation in certain spaces.”

Kenneth Kamanga (48) who lives with his wife and two of their children in a small room in another inner-city building, operates a small informal tuckshop from his room, selling vegetables, sweets and other snacks to residents of the building.

Kamanga lost most of his eyesight as a child after he contracted measles. “I was living with my grandmother and she had no knowledge of my sickness. I ended up being affected. I can only see some light with my right eye,” he said.

Kenneth Kamanga lost his eyesight after having measles as a child.

Between selling food and snacks, and donations, Kamanga and his wife want to earn enough money every month to send their children to school, pay rent and send some money back home to his family in Zimbabwe.

“When I came here, I found some blind colleagues who I used to be in school with at Copota school [the generally known name for the Margaretha Hugo school]. They were telling me how they were positively surviving,” he said. “Sometimes we depend on well-wishers. If we manage to pay rent and maybe send the children to school, we do appreciate it because a beggar is not a chooser.”

Kamanga said he has never faced any discrimination over his nationality or disability in Johannesburg, but that there was an obvious shortage of assistance offered to migrants with disabilities in the inner city.

“The worst thing of course is the way of survival. We don’t have a fixed income. Sometimes at the end of the month, you will be found wanting with rent. Getting help with legal stuff is very difficult. Also, if you have potential, you can’t even display your talent because we don’t have all the necessities to display those talents,” he said.

“Having a disability doesn’t mean we don’t have ability. We are very capable people,” he said.

“Even when we are begging, I know we shouldn’t [have to] do that. I was well educated. But some people can’t even understand. Life is so tight. You never know, you can end up being a street beggar or lying in the street.”