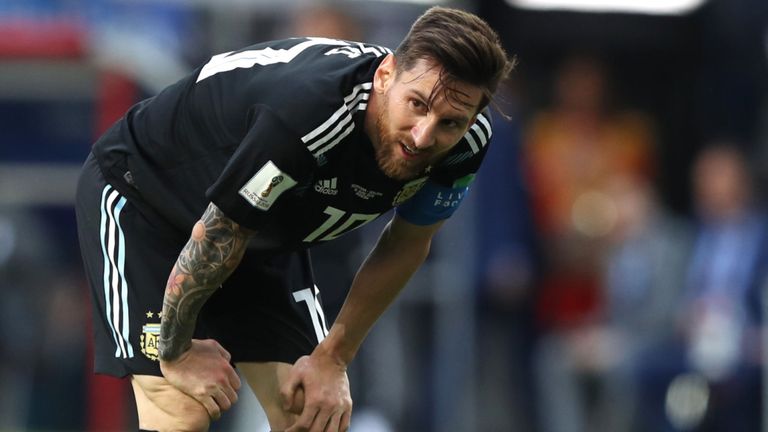 Argentina forward Lionel Messi does not need to win the World Cup to be considered an all-time great, says former striker Hernan Crespo.

Messi, 30, had a penalty saved in Argentina’s 1-1 draw with Iceland in their opening game in Russia.

He has won 32 titles and five Ballons d’Or in 14 seasons at Barcelona, but has never lifted the World Cup.

“A lot of players are great in our memories without winning the World Cup,” Crespo told BBC Sport.

“Messi is a fantastic player. I love to watch him so much and he’s a very good guy. He deserves to win the World Cup.

“How many great players didn’t win it? I don’t remember Johan Cruyff or [Michel] Platini doing it.”

The 2018 World Cup in Russia is Messi’s fourth. Argentina reached the quarter-finals in 2006 and 2010 and were beaten by Germany in the final in 2014, when Messi won the Golden Ball as the tournament’s best player.

Crespo, Argentina’s third-highest scorer with 35 goals in 64 games, said Messi’s chances of success with the national team had been undermined by factors away from the pitch.

“We don’t help him so much and by that I mean coaches, presidents of federations etc,” he said.

“It’s a pity because he’s the most important player in the world and we don’t help him. He wants to do it so much. He maybe feels that pressure.

“At Barcelona it has become natural to win but at Argentina we’ve been so unlucky.

“He’s one of the best in history. If you like football you love to see Messi.”

Argentina coach Jorge Sampaoli was criticised by the country’s legendary former captain and manager Diego Maradona after the Iceland draw, which he described as a “disgrace”.

Former Chile and Sevilla boss Sampaoli, 58, was appointed manager in June 2017 after the departure of Edgardo Bauza.

“The coach has come in for the last 10 matches and it’s not easy in that short time,” said Crespo, who played for Chelsea in the Premier League as well as having spells at Parma, Lazio and Inter Milan.

“I like Sampaoli so much but he’s the type of manager who needs time.

“In the next World Cup we will be great, but in a short time it’s very difficult. You need to choose the players that can feel each other very well.”

Crespo said the “suffering” of the squad after taking only a point from their opening game could “bring them closer together”.

Argentina face Croatia in their second Group D game at 19:00 BST on Thursday.

Under Maradona’s captaincy, Argentina lifted the World Cup in 1986 – when he won the Golden Ball – and were runners-up four years later.

He played 21 games – an Argentina record – in four World Cups.

“I don’t like to compare Diego and Messi because it’s impossible,” said Crespo.

“Diego was not just about football – he was bigger than football. It’s because of that it’s impossible to love Messi as much as Maradona.”

“Messi doesn’t get the same support from his team-mates as Maradona did,” he said.

“You can’t give all the responsibility to Messi. Because then what’s the point of you being there?”