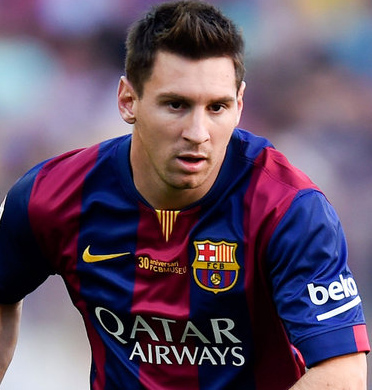 ARGENTINA captain Lionel Messi has given the strongest hint yet he could consider leaving Barcelona, saying in an interview published in Ole newspaper on Tuesday “things can change a lot in football”.
The four-time World Player of the Year, who joined Barca’s academy at the age of 13, has not been at his scintillating best over the past 18 months and has also had problems with the Spanish tax authorities.
Now 27, Messi probably has at least five years left at the top of the game and if the right offer was made, likely to be a world record fee in excess of €100 million, it is not inconceivable he could quit Barca.
Probed about his future plans, Messi told Ole he was living “in the present” and was focusing on winning titles with Barca after failure to secure major silverware in 2013-14.
“After that we’ll see,” he said, when asked if he was still planning to stay at Barca for his entire professional career.
“Things can change a lot in football. While I have always said I would like to stay there (at Barca) forever, sometimes things don’t work out the way you would like.”
Quizzed about whether he would choose to leave or whether it would happen because of someone else’s decision, Messi added: “Yes, I have said it many times. If it was up to me I would stay forever.
“But as I just said, sometimes not everything happens in the way you would like.
“The more so in football, which is so volatile and where so many things happen.
“It’s complicated, the more so during the moments like those Barcelona is experiencing right now.”
Barca are second in La Liga, two points behind Real Madrid after 11 matches, and have qualified for the Champions League knockout round.Advertisement