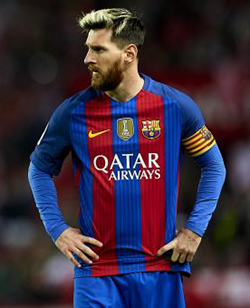 BARCELONA superstar Lionel Messi rejected a new contract with the club during the summer and may now not decide his future at the Camp Nou until his current deal expires at the end of next season, news emerging from Spain on Monday morning has revealed.
While Messi has often been speculatively linked with a move away from Barça in the past, this is potentially the most real possibility of it actually happening.
According to Marca, Messi informed the club that he would be rejecting the offer of a new deal while away on family holiday in July.
It was less than a week after he was handed a 21-month suspended prison sentence for tax evasion and also only shortly after losing the 2016 Copa America final added to his international heartbreak with Argentina – a disappointment that led to his brief international retirement.
As such, it is now believed that Messi will refuse to decide whether to commit his future to Barcelona until June 2018 when he would be due to become a free agent. He has no intention of seeking a move and will honour the terms of his contract – he may well sign an extension at that point – but his future looks set to be unknown and rather uncertain for some time.
No doubt, countless European giants – Manchester United, Manchester City, Chelsea, Paris Saint-Germain – will start to be linked with the five-time Ballon d’Or winner with increasing regularity in the coming days, weeks and months.Advertisement

Messi, who has a release clause of €250m and is one of the highest paid players in the world, is thought not to have had any formal contact with Barça officials over his contract since turning them down in July.
Camp Nou president Josep Maria Bartomeu was understandably shocked at the time and has since asked Messi to think twice and reconsider. His and the club’s hope is now that the player, who will turn 31 years just a week before the expiration date, has the kind of change of heart that saw a return to the international scene within a few short months of ‘retirement’.