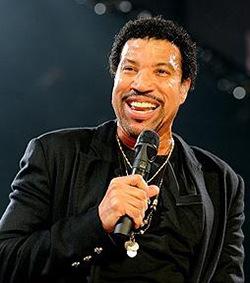 GLOBAL superstar Lionel Richie has revealed he has never made love to his own music.
The Hello singer told Piers Morgan “absolutely not” when asked, but did confess that when he was in the Commodores it was a different story.
Appearing on Morgan’s Life Stories, he said: “It would be Three Times A Lady. I’m no fool, because that was our first worldwide hit.”
Over the years, Richie has made headlines for his music and personal life in equal measure.
In 1968 he joined the Commodores as a saxophonist and singer, and enjoyed a long, successful career with the band.
He duetted with Diana Ross in 1981, on the soundtrack for the film Endless Love, and the song was so successful it prompted Richie to start exploring a solo career.
The following year he released his self-titled debut album.
Fast forward to 1984 and he released Hello, which went on to become a worldwide phenomenon.
To-date, the lyrics “Hello, is it me you’re looking for?” remain quoted around the globe.
Richie adopted his daughter, Nicole, after seeing her on stage at a Prince concert in 1984.
She was the daughter of a bandmate, and he stepped in to care for her.
A close friend of socialite Paris Hilton’s, Nicole’s party lifestyle was splashed across tabloids many times.
Richie revealed that he cancelled a tour he was on following a phone call from her, asking for help.
“I said ‘me and your mother’, who didn’t get along that well, ‘me and your mother are checking into rehab with you’.”
These days Nicole is on the straight and narrow, married to musician Joel Madden and mother to two children.
When asked by Morgan how he felt about becoming a grandfather as a “handsome pop icon”, he said: “It scared me to death.
“I’m in tight pants and she is saying ‘Grandpa’. What are we talking about? And all of the sudden the word ‘sexy’ goes out of your life right quick.
“But I was so thrilled when the little ‘pop-pop’ showed up, I mean I’ll take that position any day of the week, I love it.”
Richie’s own personal life, specifically his marriages and divorces, have been headlines in their own right.
His first wife, Brenda, was his university sweetheart, but the marriage fell to pieces after Brenda caught him with his girlfriend, Diane.Advertisement

“It was my fault mainly,” he said. “The best thing was I fell in love, the worst thing was I was still married. Yikes.”
An altercation between Diane and Brenda led to the police being called, and Richie described it as “a thrilla in Manila. It was more screaming and hollering than it was fighting”.
He married Diane and they had two children, Miles and Sofia, but they divorced in 2004.
“I made a promise that I would not go back to work,” he explained about their marriage ending.
“One day I knew I was in trouble because I just happened to stumble back into the recording studio. Over.”
Despite many other musicians of that era delving into drugs, Richie says his need to “be in control at all times” has stopped him taking drugs.
He recalls a night spent with Bob Marley in New York saying: “Bob said ‘come down to the room’ and we must partake in a room that looks like it has been set on fire.
“And it was at that point I realised that whatever I was smoking in Alabama was Lipton tea but I remembered clearly taking the rest of that night trying to remember who the hell I was!”