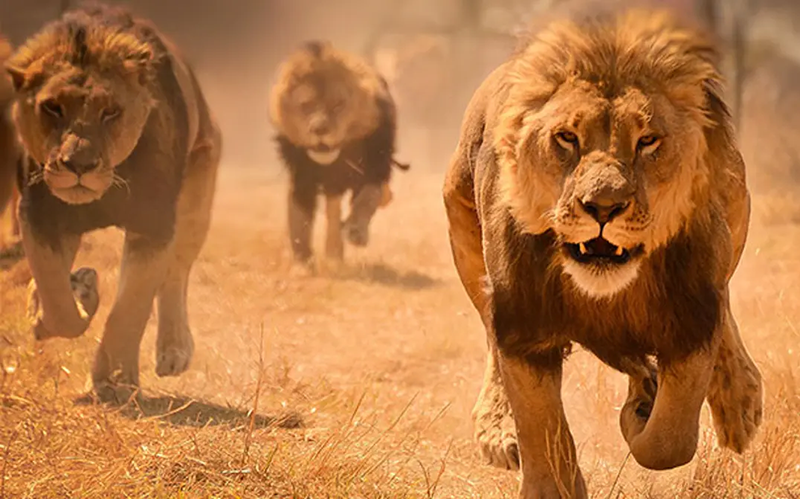 The dreaded kings of the jungle went on for two more kills — two cows that belonged to the Dube Muzondiwa family in the southern Mwenezi district.

Luckily, said one of the villagers, 38-year-old Jimson Shumba, no one was killed by the stray lions, as confirmed by national wildlife authorities.

Yet, the threat posed by stray lions in Zimbabwe is mounting even as many around the globe are celebrating World Lion Day, which aims to raise awareness about the plight faced by the endangered big cats.

The first World Lion Day was marked on Aug. 10, 2013, nearly a decade ago, and was headed by Dereck and Beverly Joubert, a Botswana-based couple passionate about the preservation of wild cats.

Concerned that lion populations have drastically dwindled worldwide, the couple approached National Geographic for a partnership and came up with the Big Cat Initiative (B.C.I.) in 2009.

From then on, the B.C.I.’s main goal would be to protect and preserve the remaining lion species all over the world.

Even as icons like the Jouberts have been fighting for the lions, humans and livestock have come under threat, their escape from conservations has, as in Mwenezi, has led to an often-lethal response from locals.

“We’re living in fear of the lions that have strayed into our areas. We fear for our cattle, goats and donkeys and we can’t move around freely as we’re afraid that we may be victims to the lions,” 56-year-old Neliswa Msipa of the Mazetese area in Mwenezi, told Anadolu Agency.

This World Lion Day, many of the villagers do not like celebrating due to their bitter experiences that led to the loss of their livestock, which is their source of income.

“What importance can be in a day marking the celebration of lions that are feeding on our livestock? The day should not be remembered nor be diarized for any reasons whatsoever,” 46-year-old Tinago Chuma of the Sarahuro township in Mwenezi, told Anadolu Agency.

Their grievances are the result of lions straying from porous wildlife conservation parks into their villages, with an unknown number of big cats said to be on the prowl in human-populated areas where they have already devoured livestock and, at times, locals.

In 2014, a stray lion from Hwange National Park mauled to death a seven-year-old boy, Elton in Chezhou village, while he was on his way to school.

With lions still straying from the parks nearly a decade later, villagers in Mwenezi live in fear.

Instead of protecting the stray lions, fearful villagers are now teaming up with parks authorities in some instances to corner and kill them, which conservationists say is gradually depleting the local lion population.

There are only about 23,000 lions left in the world, and Zimbabwe is home to more than one in ten, according to the Zimbabwe Parks and Wildlife Management Authority (ZIMPARKS).

“We have a lion population of plus or minus 2,500 and we don’t really know how many of these animals have strayed (out of the park),” according to Tinashe Farawo, the ZIMPARKS public relations manager.

With claims of porous national parks allowing the lions to wander into communities like Mazetese, Farawo told Anadolu Agency that “most of our national parks are not fenced.”

“Mostly, our animals live naturally. There’s no way to fence the parks as most of them are very big,” said the park official.

“Yes, the security is there. The only challenge we’re facing is that the animals are overpopulated. They need water, they need food,” he added, explaining that when potential prey, such as wild buffalos or antelopes, move into a human-populated area, the lions follow.

“So, when they follow, they find easy prey like cattle, donkeys, and goats,” Farawo said, adding that ZIMPARKS does not know how many of the wild cats are on the loose.

All park authorities have managed to do is eliminate stray lions, as they did those in Mwenezi.

The killed lions were said to be part of a pride believed to have strayed from the Save Valley Conservancy where the perimeter fence was vandalized by suspected poachers.

The lions were then tracked by game rangers after being spotted by Mwenezi villagers.

Villagers in Mwenezi, like Shumba, witnessed the killing spearheaded by park authorities.

“There were three lions and they were killed. One was killed in Bilibili in eastern Mwenezi, then the two that were left crossed to the Manyuchi dam, where they hid in nearby bushes.

“One male lion was eventually killed and the remaining one fled and went to some nearby game park in Pfimbiri, where it was killed on arrival,” Shumba recounted.

The killing of the lions has irked local animal rights defenders, like Livious Dombo in Masvingo, Zimbabwe’s oldest town.

“It’s cruel to kill lions when their population in the world is falling. They should be captured alive and taken back to national parks. The national parks should be securely fenced so that lions don’t stray away,” Dombo told Anadolu Agency.

But, in villages like Mazetese, the villagers beg to differ.

“The lions have triggered chaos since they strayed into our areas here. A number of villagers have lost cattle, donkeys, and goats and as villagers, we’re still living in fear, even as we hear the lions were killed. There might be another pride on the loose which we don’t really know about,” Msitheli Ncube, 45, of Mazetese, said.