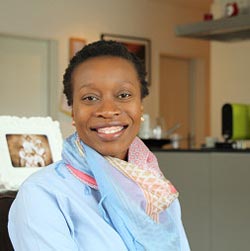 ONE year after moving to Switzerland, Zimbabwean-born Lisa Chuma set up a women’s networking event that attracted over a thousand visitors. With the Women’s Expo in its second year, she explains why she thinks she’s found a niche.
“I realised there was a gap in helping women’s businesses to grow and get a larger client base,” Chuma says ahead of the 2014 event. “An expo is a great way for them to focus on their marketing for one day, a day that they put aside for this purpose, to grow their database in a couple of hours.”
Chuma grew up in Zimbabwe, the daughter of a single mum training to be a nurse. As a child she spent a number of years in boarding schools while her mum was away working. Life wasn’t easy though.
“You had to get up at 5am to fetch water for a bath, you slept in a dorm with 20 to 30 other people.”
It was a time when strong female support would later inspire her. A group of her mother’s friends would take turns to pick her up from the school.
“If these women hadn’t stood with my mum at a time when she decided to walk out of a violent relationship, maybe she would have gone back … having that support gave her the encouragement to concentrate on her work.”
As a 16-year-old Chuma moved to London, later studied business at university and ended up working in accounting. In 2012 she moved to Switzerland with her husband for his new job and saw it as a chance to turn an idea she had to promote businesses run by women, into reality.
“There were so many things that I and my mother and other women got from being part of a community and sharing experiences. So I thought, OK, let me try and do this. Because I’ve seen it work.”
An idea takes shape
Now living near Zug, and a mother of two with another on the way, Chuma says the Women’s Expo has been a time-consuming occupation.
In 2013, months of work culminated in the first one day event at Zurich’s Kongresshaus. Women who run their own businesses and wanted to meet more potential clients paid to have a stand for the day and tell visitors what they’re all about.
Getting the event off the ground meant Chuma spent a lot of time at networking events and in meetings, talking to women about what she wanted to do and how she thought it could promote their business.Advertisement

“To get people to understand where I was coming from, it had to make sense. I had to tell people my story and share who I was and what I had been through.”
She believes female entrepreneurs have a harder time than men networking in the way that they need to, when starting a new business.
“It’s not an issue of confidence, but women tend to analyse situations too much, and can miss out on speaking to the right person, because they spend too long looking around for someone specific or someone they know.”
From her experience so far, she’s gained the impression that networking doesn’t come so naturally to Swiss women, and thinks they can tend to be more private, holding back more.
“Swiss women have told me that it’s encouraging to see me showing up at networking events where I won’t understand a word. I just want to be a part of their community, and I won’t wait until my German is perfect or I understand Swiss German.”
Chuma estimates that now 80% of the exhibitors are Swiss.
For women or by women
The term ‘women’s expo’ can conjure up images of events in other parts of the world, such as the US, which offer days spent comparing hair products and watching make-up tutorials, with a small slice of career or networking advice thrown in for good measure.
In Zurich in its first year the majority of exhibitors at the event were consultants, coaches, women selling jewellery or kids’ products and beauty companies. Quite a typically female area of the business world you might say. But is this an issue for Chuma?
“In terms of the products on sale, they are still very much more attractive to women. But I think I have got a good balance of services that men can also be a part of.”
Chuma did look around at other events to see what they were doing, but says she already had her idea in mind, and that the focus was different.
“My aim really is to help as many women who want to, to grow their businesses. It’s about making women aware of opportunities they should be taking to promote themselves.”
Measuring change
Her definition of success is based on the satisfaction level of those who took part and if they come back the following year. It is not a precise science, but she tries to get a feel for it by asking for feedback from exhibitors.
“There are a good number of businesses that are coming back,” but she admits some have decided not to join again as the increased price to take part has turned some women off.
Chuma has moved the event to a new, bigger location – the Messe Zurich exhibition space – and says she has to charge more given the increased costs. This year’s exhibition price is double her special early-bird offer from last year, and a third more than 2013 standard price.
“I had to make those steps in establishing the expo, which also meant I had to take those steps in putting up the prices…because I’m also running a business.”
Nonetheless, exhibitors spaces were fully booked for the 2014 expo.
Aside from the day itself, she runs marketing workshops and brings the exhibitors together to meet each other before the event.
“I want to be a role model, and with that comes a lot of speaking, pushing and doing in a more vigorous way.”
Looking ahead, she plans to hold the event in other major Swiss cities, such as Geneva.
“I think when I have exhibitors and visitors coming in from other countries, then I would be happy, that would be success.”

This article was originally published by Swissinfo.ch