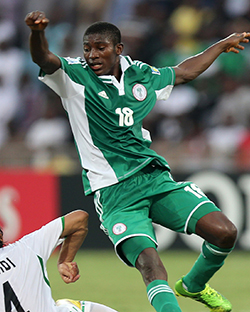 LIVERPOOL have announced the signing of Nigerian forward Taiwo Awoniyi, who will immediately head out on loan with FSV Frankfurt.
The 18-year-old, who joins the Reds having previously represented Imperial Academy in Nigeria, is to spend the rest of the season on loan with the second division German side.
Liverpool are understood to have paid around £400,000 for Awoniyi’s services.
He told the club’s official website: “This is the biggest club in the world and I’m privileged to be here.
“I’ll try to develop myself very well so that when I come back to Liverpool I’ll be able to add value to the team.
“When I’m in the red shirt, I will always give my very best to make the fans happy.”
Awoniyi is a current Nigeria Under-23 international.
He has also played for the Super Eagles at the Under-17 and Under-20 World Cups, and earned a call-up for the senior Nigeria squad in 2013.
The news of his signing comes on the same day that three players have left Liverpool.Advertisement