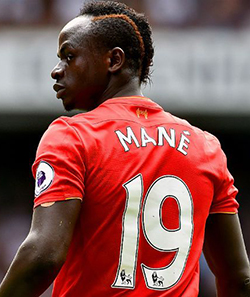 SENEGAL international, Sadio Mane believes that his club can continue their fine run in the English Premier League when he leaves for Gabon for the Africa Cup of Nations in January.
The 24-year-old has been pivotal in Liverpool’s outing this season, especially in the Premier League in which they occupy second spot behind Chelsea but the Reds will have to plan January without Mane.
The former Metz man will be away at the Afcon till January 23 when Senegal will end their group matches and his stay away from Anfield could further be extended if his country make it to the knockout stages.
Despite knowing that there could be the possibility of being away on international duty for all of January and possibly till February 5 when the Afcon comes to an end, Mane is confident Liverpool “will cope” without him.
“It will not be easy for me to go with Senegal next month. I would love to carry on playing with my teammates and help my team but I think they will understand because it is my country and it is my dream.
“I will be wishing them good luck but without me the team will be the same. Even better I think. They will cope. Coutinho will come back. (Joel) Matip will come back and (Daniel) Sturridge is back now.
“I am very happy for him [Sturridge]. It has not been easy for him being out, he has had a lot of injuries, but you know he can deliver important performances for the team. That is why the team will be strong [while I am away],” Mane told Sky Sports.
Mane has made 18 appearances in all competitions for Liverpool and has scored eight goals, all in the Premier League.Advertisement