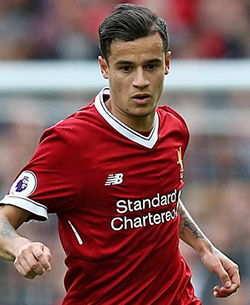 LIVERPOOL have rejected a second bid from Barcelona for influential Brazilian playmaker Philippe Coutinho worth €100 million (about US$117m) , British media claimed on Wednesday.
Barcelona are desperate to land the 25-year-old to replace fellow Brazilian Neymar who was sold for a world record €222 million to Paris Saint Germain last week.
However, the BBC reported that Liverpool have again told Barcelona that Coutinho, who signed from Inter Milan in 2013, is not for sale.
The Liverpool Echo newspaper added on Wednesday: “Liverpool have told Barca they will be wasting their time if they come back in with a third offer and are adamant that Coutinho will not be Neymar’s replacement at the Camp Nou.”
Barcelona believe the Brazilian international has the ability to not only replace Neymar alongside Lionel Messi and Luis Suarez in a star front three, but could also provide cover for 33-year-old captain Andres Iniesta in midfield.
Liverpool manager Jurgen Klopp told Barcelona “to save their energy” last week, claiming the player wasn’t for sale.
However, he was left out of Liverpool’s squad for a friendly win over Athletic Bilbao in Dublin at the weekend while a back injury seems certain to sideline him from the club’s opening Premier League match at Watford on Saturday.
Should Barcelona fail to tempt Coutinho to Spain, they are expected to turn their attentions to highly-rated French star Ousmane Dembele of Borussia Dortmund.
Dembele, 20, was involved in a training ground bust up with Dortmund goalkeeper Roman Burki last week and has spoken of his desire to one day play for Barca.Advertisement