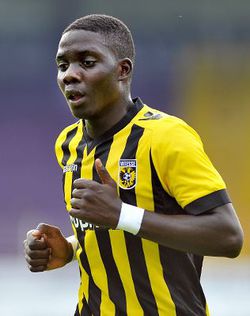 CLUBBE Brugge midfielder Marvelous Nakamba has admitted that a move to the Premier League in the future is possible, with Liverpool being linked with a move for the Zimbabwean.
Nakamba hasn’t been plying his trade in Belgium for long, and already seems to be attracting interest from abroad after only 17 matches.
Having joined from the Netherlands for $5.3m in the summer, he’s helped his side to top of the league, eight points clear of second placed Sporting Charleroi.
And now, with his combative style in the middle of the park, reports suggest that Jurgen Klopp is looking to Nakamba as a replacement for Emre Can; a move that would sit well with the 23-year-old:
“Yes, some people told me that I have a game cut for England because of my qualities, it’s (a move is) possible,” Nakamba said, according to African Football.
“It was the only European championships we could watch at home (Zimbabwe). We’ll see later, it’s nice to know that some clubs are watching me.
“What’s important now is for me to be successful with the club and my national team.
“For great competitions, here we have a good team and an excellent midfield where I feel very comfortable alongside players like (Hans) Vanaken or (Ruud) Vormer,”
Newcastle are also reportedly interested in making a move for Nakamba, but with Liverpool’s Champions League presence and overall league performance, the midfielder is believed to prefer a move to Merseyside.
This news comes with the suggestion that Emre Can will leave in January. The German is yet to sign an extension onto his current contract that expires at the end of the season, with Juventus and Borussia Dortmund lurking.
This article is taken from Sports Illustrated.Advertisement