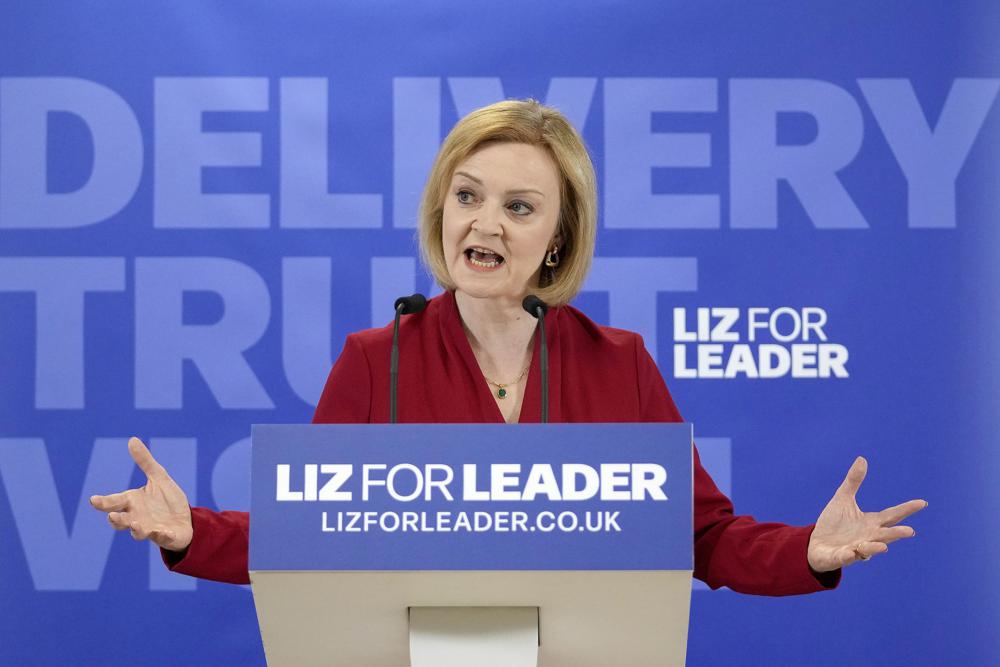 LONDON: As a child, Liz Truss marched in demonstrations against Conservative Prime Minister Margaret Thatcher. As an adult, she came to admire Britain’s first female leader — and now she is about to enter No. 10 Downing St. with a Thatcherite zeal to transform the U.K.

Truss, Britain’s foreign secretary, was named winner Monday in the contest to replace the scandal-plagued Boris Johnson as Conservative Party leader and the country’s prime minister. The party said Truss won the votes of around 57% of Conservative members, compared with about 43% for ex-Treasury chief Rishi Sunak.

Conservative Party members have embraced Truss’ vows to slash taxes and red tape and keep up Britain’s staunch support for Ukraine. Some see echoes of the Iron Lady — as Thatcher was known — in Truss’ vision of a “network of liberty” binding democracies around the world.

To critics, Truss is an inflexible ideologue whose right-wing policies won’t help Britain weather the economic turmoil set off by the pandemic, Brexit and Russia’s invasion of Ukraine.

Mark Littlewood, a libertarian commentator who has known Truss since their university days, said Britain’s new leader is less a conservative than a “radical,” who — like Thatcher — wants to “roll back the intervention of the state” in people’s lives.

Born in Oxford in 1975, Mary Elizabeth Truss is the daughter of a math professor and a nurse, who took her on anti-nuclear and anti-Thatcher protests as a child, where she recalled shouting: “Maggie, Maggie, Maggie — out, out, out!”

In a 2018 speech, she said she began developing her own political views early, “arguing against my socialist parents in our left-wing household.”

The family lived in Paisley, Scotland, before moving to Leeds in northern England, where Truss attended a public high school — something that sets her apart from her many privately educated Conservative colleagues.

During the leadership campaign, Truss emphasized her relatively modest background. But she riled some former classmates and teachers when she said students at her school were “let down by low expectations, poor educational standards and a lack of opportunity.” The school’s alumni include academics, judges and several other members of Parliament.

Truss went on to Oxford University, where she studied philosophy, politics and economics — the degree of choice for many aspiring politicians — and was president of the university branch of the Liberal Democratic Party. The economically centrist Lib Dems back constitutional reform and civil liberties, and Truss was an enthusiastic member, putting up “Free the Weed” posters that called for decriminalization of marijuana and arguing in a speech for the abolition of the monarchy.

Littlewood, who was a fellow member of the Oxford Lib Dems and now heads the Institute for Economic Affairs, a free market think tank, remembers Truss as “headstrong and determined and outspoken.”

“You were never in any doubt where she stood on an issue or a person,” he said.

After Oxford, Truss joined the Conservative Party — “when it was distinctly unfashionable,” she later said.

She worked as an economist for energy company Shell and telecommunications firm Cable and Wireless, and for a right-of-center think tank while becoming involved in Conservative politics and espousing free market Thatcherite views. She served as a local councilor in London and ran unsuccessfully for Parliament twice before being elected to represent the eastern England seat of Southwest Norfolk in 2010.

She won the safely Conservative seat after a bump on the way — some local Conservatives were outraged when it was revealed she had had an affair with another MP when both were married to other people. Truss won over her critics, and her marriage survived. She and husband Hugh O’Leary, an accountant, have two teenage daughters.