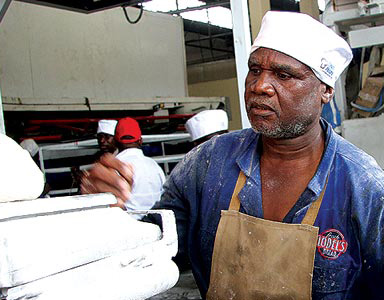 LOBELS Holdings, the country’s oldest confectionery firm has embarked on a massive retooling exercise which will significantly increase daily bread production at the company’s plants in Bulawayo and Harare.
Addressing journalists during a recent tour of the company’s factory in Bulawayo, company chairman Ephraim Chawoneka said the massive investment would also increase the company’s market share from 38% to 45 by end of December next year.
The company chairman said following the investment, daily bread production figures at the Harare plant are set to rise from the current 30, 000 loaves to 340,000 units by December 2015.
“The Bulawayo plant has an installed capacity of 100,000 per day and this is expected to grow to 150,000 units by December 2015 through this massive investment.
“The capacity for both the Harare and Bulawayo plants will be at 490,000 loaves per day upon the completion of the retooling exercise,” said Chawoneka.
The new investment would also create more jobs, adding to the current 1,430 employees which the company employs at both the Harare and Bulawayo factories.
“Despite massive investments in state of the art equipment we remain committed to creating employment for our young unemployed,” said Chawoneka.
“The passion with which we pursue our business has been amply demonstrated by the significant investment that we have made at our Bulawayo plant at a time when other operators have been downsizing, closing shop entirely or relocating to other towns.”
Lobels Holdings was established in 1957 by the Lobel family in Bulawayo, then the country’s industrial hub.
The company was then sold to a consortium of indigenous Zimbabweans in 2002 and has since expanded its operations in Bulawayo as well as in the capital.Advertisement