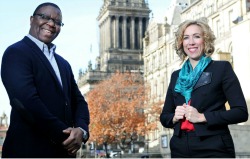 MULTI-MILLION dollar Nursing, Social and Community Care agency, Local Care Force (LCF), have been unveiled as sponsors of the sixth edition of the Zimbabwe Achievers Awards (ZAA).
ZAA’s Head of Strategy and Corporate Affairs, Louis Charema said they were delighted to have the well respected and admired company on board.
“The partnership with Local Care Force only proves the ongoing commitment to engaging and supporting community initiatives, and their backing will only help strengthen an already growing relationship with the Zimbabwean community,” Charema added.
Local Care Force, winners of last year’s Company of the Year award, said they were delighted with the partnership.
“We won the sought-after Company of the Year accolade at the Zimbabwe Achievers Awards in 2015 and this year we return to the awards but as a sponsor,” LCF Director, Leanne Silverwood, said.
“The platform ZAA gave us online last year positively impacted our brand and since winning, we have seen an increase in workers registering with us,” Silverwood added.
Following a successful 2015 which saw the business turnover in excess of £13million, the care agency is to shortly expand its operations and open up new offices, a stone’s throw from York Minster, to support its continued growth in North Yorkshire.
“The past year has been good for the organisation and our staffing numbers are continuing to grow, even somewhere as notoriously tough to recruit as York!” said Co-Director, Samuel Rutsito.
“Sponsoring the event isn’t only giving something back but also an opportunity to continue to raise awareness of our brand in the Zimbabwean community,” Rutsito added.
With 60 permanent staff, 3 Clinical Lead Nurses, on-call co-coordinators and 5 trainers, the organisation has over 1600 temporary nurses, care workers & support workers on its books and supplies to over 193 organisations with approximately 1534 different services within those organisations.
“Opening the office in York is a celebration of the long relationship with our clients and workers in North Yorkshire.”
“This new office space, complete with incredible and specially designed frontage, will hopefully ensure that we are the first choice for anyone looking for work in the industry and increase footfall into the branch,” said Leanne Silverwood.Advertisement

Established in 2004, LCF has offices in Leeds, Sheffield and Manchester, and York will become a new service by the end of the year.
It is the preferred supplier of many large, private, public and charitable organisations, providing temporary and permanent staffing solutions, including fully trained and specialist qualified Nurses through to complex care health workers.
ZAA celebrates its sixth anniversary this year and the event will be held at the renowned five-star Royal Garden hotel in London on the 7th of May.
The awards ceremony has established itself as the leading platform for honouring the hard work and achievements of Zimbabweans living in the UK, in areas that include business, the arts and music.
Voting is still underway and the lines will close this Friday, the 29th of April. Thereafter, the panel of experts will undertake the arduous task of tabulating and vetting the results before they compile their list of winners for 2016.
Tickets are still being sold exclusively for £89.95 and can be bought directly from zimachievers.com. Implemented in 2014, the world class ticketing system has afforded those purchasing their tickets the opportunity to pick where they would like to sit on the night of the awards ceremony.
The ticket deadline has been extended to the 2nd of May and the organisers have encouraged the public to get their tickets before the deadline approaches.