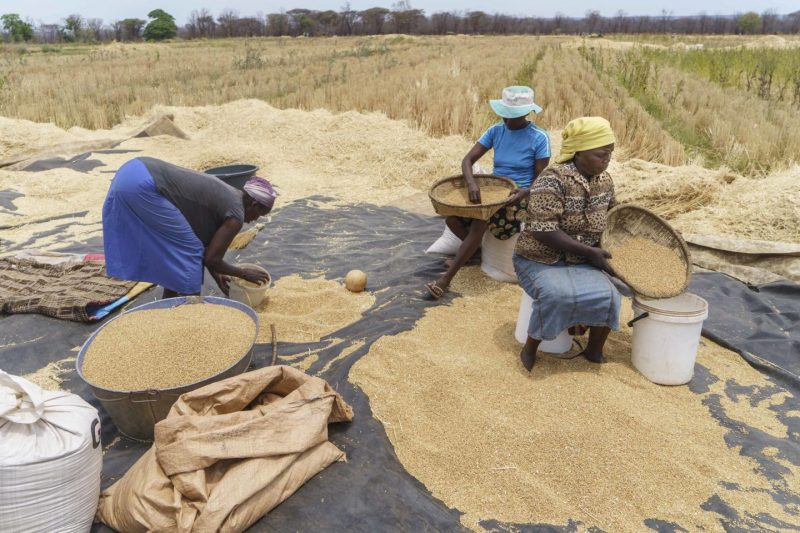 Farmers get their harvested wheat ready for packing. They stopped planting wheat in 2018 owing to drought, but were able to do so again after good rainfall this past season.
Spread This News

IT IS mid-morning in late October and Linda Ncube, 58, puts on a large cotton hat to protect herself from the searing sun.

As she prepares her wheat harvest for packing on a section of a vast field with the help of colleagues, her face reveals a sense of satisfaction.

She is one of 61 small-scale farmers who are members of the Tshongokwe irrigation scheme, which covers 24 hectares of land in the Lupane district in Matabeleland North, one of the driest regions in Zimbabwe. It was started with a handful of communal farmers by the colonial government in 1966.

The farmers have always grown a variety of crops, including vegetables like beans, butternut, cucumbers, onions, and tomatoes, as well as maize and wheat. But they stopped planting wheat in 2018 because persistent poor rains and siltation left the Tshongokwe Dam – the main water source for irrigating their crops – dry. When abundant rains fell during the last season, the farmers were able to plant wheat again.

Ncube got half a tonne from her tenth of a hectare, which is the share of land each farmer in the scheme works. Although she is happy that she got a good harvest, she is concerned that the dam quickly dries up owing to erratic rainfall. The canals they use to get the dam water to the crops are also not ideal.

“We use canals that were constructed from the dam stretching all the way to these fields. I believe that this is wasteful as a lot of water is lost along the way. The [volume of] water in the dam has been decreasing over the years because of cyclical droughts and its capacity has also been reduced due to siltation. Sometimes it runs completely dry leaving our crops vulnerable,” said Ncube.

“As it is, we have a maize crop that was almost ready for harvest, but we are having to write it off because the water in the dam is no longer enough to see it through. We have to find a more effective method of watering our crops without wasting too much water.”

But there have been some interventions that have benefitted the farmers of Tshongokwe. With the help of Sizimele, a project aimed at building resilience among at-risk small-scale farmers, as well as local and international non-governmental organisations, two solar-powered boreholes were sunk towards the end of 2019. The farmers also received drip irrigation equipment. This enabled them to put four hectares under drip irrigation, helping them to diversify their crops.

More recently, the farmers were introduced to climate-smart technology, which they have been taught to use. It consists of two basic instruments that are complementary. One is called the wetting front detector, also known as the “full stop”, which is a funnel-shaped instrument that is buried in the soil. An indicator left above the surface shows how deep into the soil water has infiltrated and helps one to “see” what is happening in the root zone of the crops. It also takes a soil sample that is used to measure its salinity and nutrient content.

The second instrument is called the “chameleon” and consists of three or four short cords in different colours with sensors at their ends. The cords are inserted into the soil at different depths. A handheld reader shows a blue light if the soil is wet, green if it is moist and red if it is dry.

“The equipment helps us to determine whether or not there is enough water or moisture for the crops in the soil, and it also shows us whether we need to apply more fertiliser to our crops or not,” Ncube said.

“At times, there is a temptation for farmers to just keep watering the crops even when they have adequate water, and this can result in leeching of the fertilisers in the soil. At other times, we may not water our crops adequately and they can die. So this is very useful as it helps show us the moisture and fertiliser content in the soil. This is very important because we are able to conserve our precious water and we also save on the costs of fertiliser.”

The International Crop Research Institute for the Semi-Arid Tropics, whose local branch is situated in Matopos on the outskirts of Bulawayo, worked with a partner in Australia to adapt the technology for use in parts of Zimbabwe five years ago. According to Martin Moyo, a farming systems scientist at the institute, it has produced great results.

“The devices have been tested in various places, especially the drier regions in the country, and after a few years farmers achieved impressive results with the use of the tools.

“They decreased the amount of water they use for irrigation to about 30% less than previously, and are thus saving scarce water resources. Despite the reduction in water use, yields have increased by more than 25% for most of the farming households within the irrigation schemes that we have worked with. This means that productivity has increased and farmers are able to grow a lot more crops with less water,” said Moyo.

Khethiwe Ndlovu, also a member of the Tshongokwe irrigation scheme, used to stay with her husband in Bulawayo. She came to live in Lupane after he got retrenched. Ndlovu says despite droughts occurring more frequently, farming provides her with a good livelihood because using the new technology means that she and her colleagues are able to adapt to climate change.

“The use of this method, together with the climate-smart technology, mean that we can farm more effectively than we used to, cutting costs but at the same time improving our yields. Despite the fact that rains are sometimes poor, I believe we can still be able to remain farming because of such adaptation. I have been able to help my husband take care of our children and put them through school because of farming,” Ndlovu said.

Africa is the lowest contributor to global warming, but experts say the continent is exceptionally vulnerable to climate change mainly because of its high dependence on low-productivity agriculture for food, income, and employment.