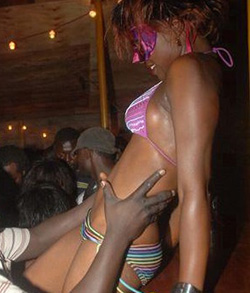 THE inclement economic weather has hit the world’s oldest profession with local pros in Bulawayo saying the situation there has not been helped by the fact local men are notoriously parsimonious.
In interviews with NewZimbabwe.com, most ‘ladies of the night’ said business was so bad that they are forced to charge as little as $1 for a “quickie” and just $3 for a whole night of work.
While clients are ever eager, they are so cash-starved that, in some cases, they offer a plate of Sadza in lieu of cash as payment.
“Local men rarely want to pay for sex, they are so stingy that some try to pay for sexual services with a plate of Sadza,” said a lady who only wanted to be known as Zanele.
“We are now charging as little as $1 for a quick in order to, at least, get something to take home and feed the children.”
The ‘veterans’ also blamed the influx of “cheap, young and inexperienced girls” into the business for bringing prices down.
The City of Kings is known for its illicit social drinking in so-called shebeens but these are not an option for the sex peddlers.
“Most people who drink in shebeens are a close community.
“Trying your luck there is asking for trouble with the men’s wives and children,” said Lolo.
Some of her colleagues said they were planning to move town.
A few said they would try their luck in towns like Kadoma and Kwekwe where gold panners flush with cash do not know the meaning of frugal.
“Men here (in Bulawayo) hardly part with their money and it’s getting worse.
“I am thinking of going after Amakorokoza cash,” said another lady who called herself ‘Sexy Eve’.
Despite the crunch in business however, sex workers in the country’s second largest city are not staying at home.
Night clubs dotted in the central business district such as the popular Lagondola, The Lounge, Horizon, Clud Eden, Club 40/40 are usually teeming with sex workers.
And HIV is no longer a concern either, where punters do not want to use condoms.
A bigger worry for the ladies is the risk of pregnancy, not getting infected with HIV.
“If I take a risk and get infected with HIV, I can live positively with Aids,” said Nothando.
“But getting pregnant will push you out of business. And it’s also very expensive to raise a fatherless child.”Advertisement