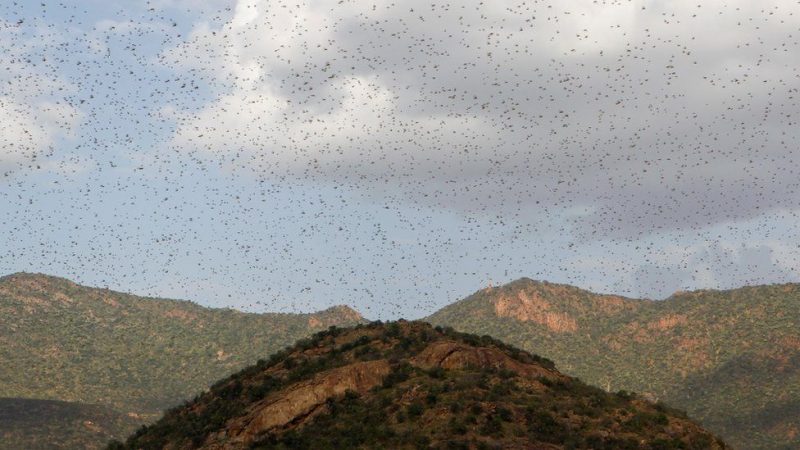 The UN has called for international help to fight huge swarms of desert locusts sweeping through east Africa.

A spokesman for the UN’s Food and Agricultural Organisation (FAO), called for aid to “avert any threats to food security, livelihoods, malnutrition”.

Ethiopia, Kenya and Somalia are all struggling with “unprecedented” and “devastating” swarms of the food-devouring insects, the FAO has said.

The agency fears locust numbers could grow 500 times by June.

Ethiopia and Somalia have not faced an infestation on this scale for 25 years, while Kenya has not seen a locust threat this size for 70 years, the FAO said earlier this week. South Sudan and Uganda are also at risk if the swarms continue to grow and spread.

“The speed of the pests’ spread and the size of the infestations are so far beyond the norm that they have stretched the capacities of local and national authorities to the limit,” the FAO said.

The only option left was “aerial control” – spraying insecticide from aircraft.

The swarms have spread from Yemen across the Red Sea. Heavy rainfall at the end of 2019 created ideal conditions for the food-devouring insects to flourish.

And the problem could get worse as the year goes on. Aside from growing numbers in east Africa, locusts have also been breeding in India, Iran and Pakistan, which could turn into swarms in the spring.

Locusts can travel up to 150 kilometres (93 miles) in a day. Each adult insect can eat its own weight in food each day.

A swarm the size of Paris could eat the same amount of food as half the population of France in a single day, an FAO fact sheet says.