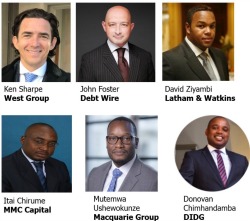 LONDON will this Friday host a Zimbabwe investment conference with over 20 international speakers lined up.
The one day Financial Markets Indaba, hosted by Thomson Reuters and Emergent Capital Management, will be held at Thomson Reuters Building in Canary Wharf.
The Indaba is in its fourth edition with some of the previous editions held in Harare, Johannesburg and London.
“The Financial Markets Indaba is convening some of the most extraordinary individuals from investment boutiques, Advisory firms, Operators and Fund managers in London and from Zimbabwe and South Africa,” the organisers said in statement.
“Over the past three conferences, the Financial Markets Indaba platform has hosted 112 speakers; with 48 being at least Managing Directors of finance related firms. The level of conversations, debates and interactions experienced at these platforms has continued to foster thought leadership and innovation in finance and investment markets in Zimbabwe”.
The indaba will afford potential investors the opportunity to showcase their expertise and local knowledge to companies who are looking to do business with entities operating in Africa.
Earlier in the year Zimbabwe was ranked as one of worst economies for investments in Africa.
According to the Africa Investment Index of 2016, Zimbabwe was ranked 37 out of 54 Africa countries.
Some of the country`s laws like the controversial indigenisation law have been blamed for the low foreign direct investment (FDI) inflows.
However, the Zimbabwe Investment Authority (ZIA) says FDI has improved in the first half of 2017 following the clarification of the indigenisation law by President Mugabe.
Figures from the ZIA show that approved investments and joint ventures accounted for US$609 176 657, 23 compared to 2016’s US$305 587 782, 77.
Economic experts are on record saying lack of political will and poor administration are some of the stumbling to inflows of FDI into the country.Advertisement