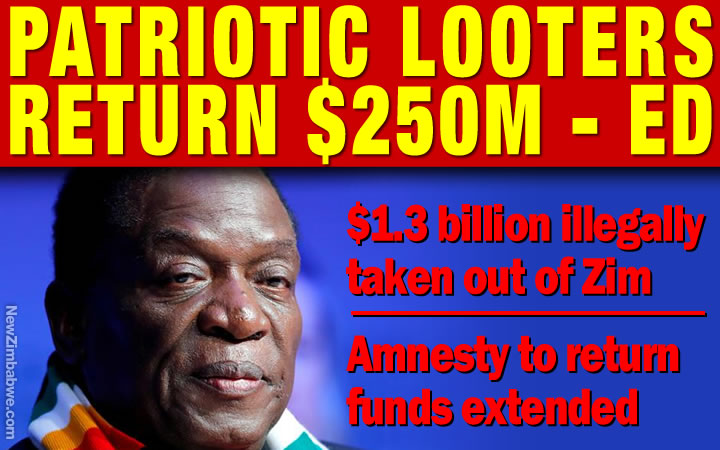 PRESIDENT Emmerson Mnangagwa has revealed that government recovered $250 million from about $1.3 billion looted and externalised from the country by individuals and organisations.

He was giving an update on the three-month amnesty he issued in December for the return of the funds and assets, failing which government would take action.

“Government is pleased to inform the public that from the 1,166 externalisation cases (valued at $3.1 billion) known by government, a total of 105 cases valued at $250 million were processed by the Reserve Bank of Zimbabwe (RBZ) in respect of externalised foreign currency,” the president said in a statement this week.

“Thirty (30) cases valued at $50 million of immovable property in various countries were reported to the RBZ, while 210 cases valued at $287 million pertained to externalized funds that were used to procure imports.

“These cases processed give a success rate of 45% by value.”

The Zanu PF leader said the amnesty was being extended by a further two weeks, warning that those who defy the directive to return externalised funds would be publicly shamed and prosecuted.