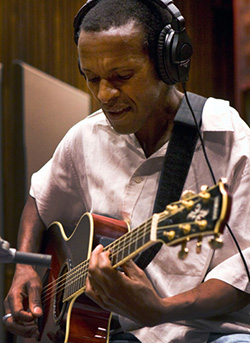 ZIMBABWE born jazz maestro Louis Mhlanga, is set to headline al the Gaborone International Jazz Festival scheduled for April 4 at the beautiful Serokolwane Lawns in Gaborone.
The venerated guitarist will share the stage with other international acts such as Jimmy Dludlu from South Africa, HHP and his choir group, Edemol, Atjazz from the UK and South African revered all-male choral outfit Blacksmith Mambazo.
Artists from Botswana to perform at the event include Nnunu Ramogotsi a member of Women of jazz Botswana Group that has contributed musically in taking Botswana to greater heights.
The group comprises of Punah Gabasiane, Nnunu Ramogotsi and Kearoma Rantao.
Botswana’s female award winner and Afro jazz singer Punah Gabasiane and upcoming Mpho Sebina will be performing as well.
In an interview last week, Mhlanga, who is currently based in South Africa, said he is expecting to have a great performance at this festival in conjunction with other international acts.
“It’s the first time for me to be part of this festival and looking forward to it with excitement,” he said.
“It’s always great to play alongside other acts because when I go out of the country, I am an international act too.”
Themed “#jazzonthelawn”, the festival was conceived to not only add to the enrichment of Botswana’s entertainment industry but also to speak to the country’s economic diversification initiatives within the arts and culture sphere.
“We believe that this Jazz Festival will highlight Botswana as one of Africa’s entertainment destinations also adding to the country’s tourism strategy.
“This immediately presents Gaborone with an opportunity to showcase its ability to host cosmopolitan events and upgrade its status as a tourist destination of choice.
“By extension, the show will tremendously add value to the services market, hospitality industry and the arts and culture communities in general,” said the organizers in a statement.Advertisement