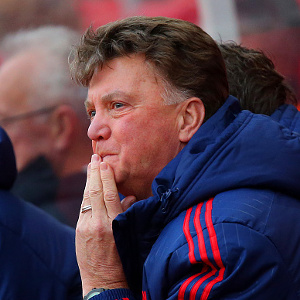 MANCHESTER United’s under-performing players approach Monday’s home game with Chelsea not knowing whether besieged manager Louis van Gaal will still be in the dug-out when they take to the field.
United’s 2-0 defeat at Stoke City on Saturday was their fourth loss in succession – the club’s worst run within a season since 1961 – and reduced Van Gaal to a dead man walking in the eyes of the British media.
The Dutchman admitted afterwards that he could not be certain of the United board’s support and raised the prospect that he could choose to leave Old Trafford of his own accord.
“I have said already in former press conferences that it is not always that the club has to fire or sack me. Sometimes I do it by myself,” he said.
“I am the one who wants to speak first with the board of Manchester United, with my members of staff, with my players and not always you (the media).”
Chelsea dispensed with their own manager last week, Jose Mourinho paying the price for a calamitous start to the season, and the Portuguese is the favourite to take over at United in the event that Van Gaal departs.
Whatever fate befalls Van Gaal, there is guaranteed to be at least one sexagenarian Dutch coach in attendance at Old Trafford after Guus Hiddink’s appointment as interim manager at Chelsea.
Reprising a role he previously performed in 2009, the 69-year-old began life back at Stamford Bridge with a 2-2 draw at home to Watford that left the champions two points above the relegation zone in 15th place.
Diego Costa scored twice to earn Chelsea a point – book-ending goals from Watford strikers Troy Deeney and Odion Ighalo – but will miss Monday’s game through suspension. Loic Remy is expected to deputise.
“We will go to Old Trafford. It will be difficult, but I hope this team will show, in every game, the ambition like they showed against Watford,” Hiddink said. “We are going there for the win.”
Second-place Arsenal will hope to get their title challenge back on track when they host Bournemouth on Monday, less than 48 hours after an embarrassing 4-0 defeat at Southampton.
With leaders Leicester City having lost 1-0 at Liverpool, victory would have sent Arsenal top, but they put in a bafflingly below-par display that resulted in their heaviest defeat of the campaign.
AGUERO PRIMED FOR LEICESTER Advertisement

“These players have fantastic spirit and they will show that in 48 hours. We want to respond from the disappointment,” said Arsenal manager Arsene Wenger.
“I trust my players to respond well on Monday. Bournemouth have played very well recently.”
Leicester remained top despite their first away defeat of the campaign, but on Tuesday face a taxing home game against third-place Manchester City, who returned to form on Saturday by crushing Sunderland 4-1.
Manuel Pellegrini’s side will be without captain Vincent Kompany, who aggravated a calf injury against Sunderland, but striker Sergio Aguero is likely to start after being rested.
“I hope we have Kun (Aguero) 100 percent fit next week,” said Pellegrini.
“He had a small problem, so it was better for him not to take any risks. He will be 100 percent on Tuesday.”
Tottenham Hotspur moved into the top four on Saturday by beating Norwich City 3-0, Harry Kane scoring twice, and they face another promoted team on Monday in the form of Watford.
While bottom club Aston Villa – nine points from safety – and second-bottom Sunderland – four points better off – are at risk of being cut adrift, just three points separate third-bottom Newcastle United and 13th-place West Bromwich Albion, who face off at The Hawthorns.
Newcastle manager Steve McClaren admitted that he faced a struggle to rouse his players after they succumbed to a 93rd-minute Tom Cleverley header in a 1-0 home defeat by Everton.
“It’s very difficult, just straight away refocus and lift,” he said.