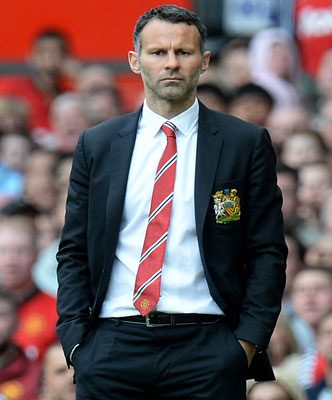 MANCHESTER United boss Louis van Gaal has insisted there is no rift with his assistant manager Ryan Giggs and reacted angrily when questioned about their working relationship.
Giggs’ lack of reaction to United’s winner at Newcastle was captured on television – while by contrast Van Gaal shouted and gesticulated in celebration.
Asked about their relationship Friday, Van Gaal answered sarcastically before saying he was irritated by the questions.
He told a news conference: “No. We have a very bad relationship. I cannot answer that. I want to have those rumours.”
He then added: “I am very irritated at this question because everyone can see we have a very good relationship.
“We work very hard together. Not only with Ryan but with all the staff and the players. It is a way of suggesting things. I am very irritated.
“I take my measures against the media. I am not pleased.”
Giggs’ friend and former United team-mate Paul Scholes has claimed the Welshman may not have the patience to remain as a number two for long and may leave the club.
Scholes told BT Sport: “There’s no doubt, he had that little taste of it for the last three weeks of last year and he definitely wants to be a manager.
“You can see that. Over the next two or three years, will he have the patience to be a number two for that long? I’m not sure he will.”
Giggs, who took charge of the side for three weeks after David Moyes was sacked last season, has said he enjoyed that four-game spell but is “serving his apprenticeship again”.Advertisement