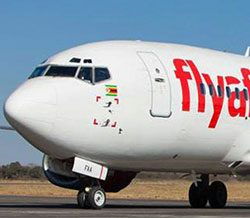 THE growth of low-fare airlines in the country is expected to help grow the tourism sector as travel becomes cheaper and connectivity improves, industry experts have said.
Government has adopted an open skies policy which has seen the entry of two low cost airlines into the local market and relaxed visa requirements for emerging economies in a bid to push arrivals to over 3,2 million this year.
It has also been running a campaign to improve perceptions of the country as a security risk.
Low cost operator, Fly Africa, which was licenced by the Civil Aviation Authority of Zimbabwe (CAAZ) in August last year, started flying in November from Harare to Johannesburg and Victoria Falls to Johannesburg.
It has since expanded its wings to include the Harare to Johannesburg and Bulawayo to Johannesburg routes.
Another budget airline, Fastjet, last month received an air service permit (ASP) from government, the penultimate step before obtaining an air operator certificate which will enable the airline to operate in Zimbabwe.
The start-up carrier is already serving eastern and southern Africa, and has pursued an acquisitive strategy to extend its reach. Last year, it introduced flights on the Dar es Salaam-Harare route.
Its receipt of an ASP means that the CAAZ and the transport ministry have approved its business plan, aircraft choice and proposed structure of the planned airline as appropriate to operate and compliant with Zimbabwe regulations.

The two airlines have left national carrier, Air Zimbabwe, which is plagued by operational challenges, in the shade.
It has responded by reviving flights to tourism hot spot of Kariba and announced plans to resuscitate the Harare-Masvingo-Chiredzi route.
All this is good news for tourism, industry players said.
“The one challenge we have in Zimbabwe is accessibility to tourism destinations.
“The coming in of new players to service domestic destinations is a positive development which will boost confidence of travellers and marketers,” Zimbabwe Tourism Authority head of corporate affairs Sugar Chagonda told The Source.
Fastjet said it has identified many potential routes within and from Zimbabwe where it believes that the low cost model will stimulate the market and tap into the huge market of passengers currently travelling by bus.Advertisement

It noted that as many as 100 buses a day travel the 1,100km journey between Harare and Johannesburg at fares up to $120.
“We recognized the real potential in Zimbabwe some time ago and as such have been working with the authorities both to build fastjet Zimbabwe and obtain permission to commence operations to various domestic and international destinations from the country,” it said when announcing the ASP award last month.

Its entry would improve destination connectivity between the tourism spots while the growth of low cost aviation will not only boost travelling effectiveness but tourists’ movement, both domestically and regionally, industry players say.
“We have a problem of accessibility but the coming in of these new airplanes will increase the number of arrivals in Victoria Falls and this will revive the business,” said Employers’ Association of Tourism and Safari Operators president, Clement Mukwasi.
“We are seeing Victoria Falls becoming central hub for aviation, taking over from Johannesburg which is currently offering the shortest  connection in Southern Africa. Therefore the licensing of other  airplanes can attract more customers who are currently using the Johannesburg route.”
He added that the operators are increasing their capacity to accommodate the expected increase in arrivals after the completion of renovations at the Victoria Falls International Airport.
The $150 million Chinese funded expansion will boost its aircraft handling capacity and includes construction of a new 4km runway, expansion of the existing runway, construction of a new terminal building, and road network and car park.
A new fire station and control tower are also being built at the airport, funded by China-Exim Bank.
The new terminal will be used for international flights while the existing terminal will be converted to domestic use as the new look facility will handle more than double its current handling capacity of 500,000 passengers per year.
Tourism is one of Zimbabwe’s economic drivers currently contributing 10  percent of the gross domestic product.