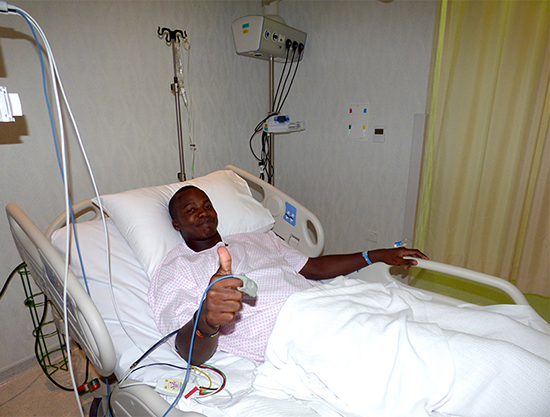 Zimbabwe – 185 for 6 in 20 overs (Hamilton Masakadza 49, Vusumuzi Sibanda 35, Richmond Mutumbami 30; Imran Haider 5/21)
Sharjah Cricket Club – 168 for 4 in 20 overs (Rameez Shahzad 65*, Ghulam Shabbir 61; Tendai Chisoro 1/18)
Zimbabwe won by 17 runs.
ALL-ROUNDER Luke Jongwe suffered a head injury in Zimbabwe’s first practice match at the Sharjah Cricket Ground in the United Arab Emirates on Tuesday.
While attempting a return catch, Jongwe missed the ball and it hit him above the right eye.
He was taken by ambulance to hospital where an x-ray revealed no damage.
However, as a precautionary measure, he also underwent a magnetic resonance imaging scan.
Because of the possibility of nausea and vomiting, Jongwe was then put on a drip and hospitalised for observation. He will be reviewed today.
On the field, Zimbabwe put up 185 runs for six wickets, with the inform Hamilton Masakadza falling a run shy of a half-century and Vusumuzi Sibanda and Richmond Mutumbami chipping in with 35 and 30 runs respectively.
Imran Haider was the pick of the Sharjah Cricket Club bowlers, claiming a player-of-the-match winning five wickets for 21 runs in four overs.
Chasing, the hosts put up 168 runs for four wickets in their allotted 20 overs, leaving Zimbabwe winners by 17 runs.
Zimbabwe had won the toss and decided to bat.
Zimbabwe will play the Sharjah Cricket Club again on Thursday at the same venue, in a programme rescheduled due to the unavailability of the initial opposition, the United Arab Emirates side, following their progression in the ongoing Asia Cup.
There will be two more practice matches for Zimbabwe at the Sharjah Cricket Ground, this time against the West Indies on Saturday and Monday, before departure for India and two more warm-up matches against Bangladesh on the 4th of March and Ireland on the 6th, under the International Cricket Council (ICC) practice schedule for the World Twenty20 tournament.
The two matches are in Dharamshala.
The Zimbabwe touring party will then go to Nagpur, for their ICC World Twenty20 qualifying Group B matches against Hong Kong, Scotland and Afghanistan.Advertisement