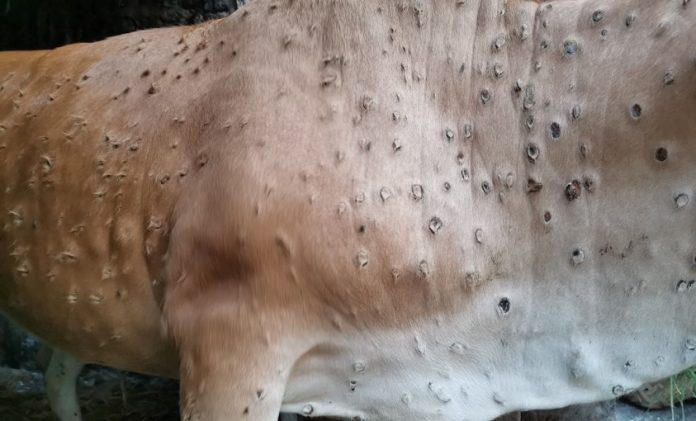 A DEADLY skin diseases known as lumpy skin is killing livestock, mainly cattle, in large numbers in Binga amid fears it may spread to other parts of the country if no urgent intervention is made.

Lumpy skin is a virulent disease spread by mosquitoes, especially during the rainy season. The symptoms include fever, discharge from the eyes and nose, skin lesions, oedema of the limbs, and swollen lymph nodes.

Last year, about 60 cases were detected in Matabeleland North and 400 cattle were affected by the skin disease in the whole of Matabeleland.

Matabeleland North provincial veterinary service officer Pollex Moyo, however, said they were yet to receive such reports.

“We haven’t received any reports concerning the outbreak of lumpy skin disease in Binga yet. Maybe the villagers are yet to report the issue to our department,” Moyo said.

But, several villagers said the affected livestock is dying.

“Cattle in the Tyunga area under Chief Siamupa have been affected by the suspected lumpy kin disease. The symptoms noted are swollen feet, sometimes from the feet to the knees, white stuff that is produced from mouths of the beasts, and rash all over their bodies.  We are losing cattle,” a villager David Muleya said.

“Titus Siamuleya lost two beasts while the other three were seriously affected. Another local farmer has also lost some beasts in the same area of Tyunga (Aiakancele village).”

Lovemore Mudenda said: “The outbreak was first discovered after the death of some beasts in Njobola village, and also under Tyunga area (Chief Siamupa), farmers have also reported cases of the virus to the animal husbandry staff or Agritex extension officers who have been working with the farmers advising them to buy antibiotics such as procumbent, penicillin, to mention a few.”

In an unrelated matter, the government has been blasted for delays in assisting flood victims in Binga after heavy rains destroyed public infrastructure and crops early this year.

Citizens Coalition for Change (CCC) Matabeleland North chairperson Prince Dubeko Sibanda said the flood victims were yet to get assistance.

This was after heavy storms swept through Manyanda village in Pashu ward 19, and part of Chief Dobola ward 14 on January 11 leaving a trail of destruction on the road network and fields.

Indications are that Manyanda Bridge was washed away, a situation that has disconnected the village from other areas and business centres.  Motorists are having a difficult time in the area.

Sibanda, who is a former MDC Alliance Binga North MP, is now a candidate for the constituency in the March 26 by-elections.

“They do not prioritise us at all. What happens to the people seems to be none of their concern most of the time. I am not surprised at all that the government is taking time to give us feedback on the way forward when it comes to the destroyed bridges and the crops that were washed away by the heavy rains,” Sibanda said.

Binga’s chief Pashu (George Nyathi) said he wrote to the Local Government ministry informing it about the destruction on January 16, but had not yet got a response on the issue.

“Our major worry is that the remaining piece of the bridge might not survive the continuous heavy downpours,” Chief Pashu said.

Efforts to get a comment from the Binga district development co-ordinator Land Kabome were fruitless yesterday.