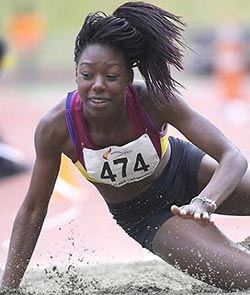 ATIPA Mabonga has gone from a virtual unknown in Southland athletics to the top of New Zealand’s national triple jump under-18 rankings.
Her best jump in the season under review was 11.56m, when she finished second in the under-18 women’s section at the New Zealand Track and Field Championships in Wellington last month. The Central Southland College student is coached in Invercargill by Lance Smith.
“She burst on to the scene … no-one knew her until December,” Smith said.
Mabonga, 15, is the only Southland-registered athlete in the New Zealand team for the Oceania Area Championships in Rarotonga in June. The 22-strong Kiwi team is made up of 16 juniors (under-20) and six seniors.
A member of the Otautau Athletics Club, Mabonga was second to archrival Adriana Mawhinney (Dunstan High School) in the junior girls’ triple jump at the national secondary schools’ track and field championships in Hamilton in December. Mabonga jumped 11.13m.
She featured at two meets at Surrey Park, Invercargill, last month. The teenager recorded 11.04m to win at the Southland secondary schools’ championships and jumped 11.07m for second behind Mawhinney at the Otago-Southland secondary schools’ championships.
Her parents, Edwin and Fungai, are Otautau dairy farmers. The family moved from Zimbabwe to New Zealand 12 years ago.
Otautau Athletics Club president Dianne Davidson said “it’s wonderful” to have Mabonga in the New Zealand team at the Oceania Championships.
Mabonga is the Otautau club’s first New Zealand representative in its two-year history.
All of the club’s 80 members are aged between 4 and 15.
The club is based at the Otautau Primary School, at which Davidson is deputy principal. The club and school share equipment and gear.Advertisement