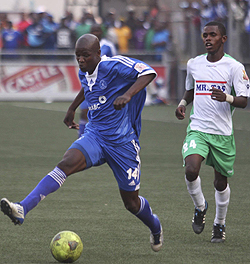 Dynamos 1-0 CAPS United
OSCAR Machapa scored a first half derby winner at Rufaro as Dynamos opened a two-point lead in the Premier League title race on Sunday.
The match was marred by missile-throwing from CAPS United fans late on as Dynamos players employed some time wasting to run down the clock.
It was the former CAPS United defender’s first goal since returning home from a spell with Moroka Swallows in South Africa, and what a goal it was!
Receiving a pass on the right touchline seven minutes before half-time, the burly player cut inside, leaving Tawanda Munyanduri in his wake before unleashing a left footed screamer that United goalkeeper Tafadzwa Dube could do little about.
Machapa said after the match: “I said before the game that I’ve never lost a derby, and I’m happy I was the one who scored. It’s a great feeling.”
The defeat ended CAPS United’s 10-match unbeaten streak and ensured that the green side of Harare has not tasted derby victory against the old enemy in five years. In the reverse encounter, Devon Chafa – suspended by FIFA after testing positive to a banned substance – converted from the spot for a 1-0 win.
Dynamos were the dominant side from the start and were nearly in front just after seven minutes but Washington Pakamisa – another former CAPS player – mistimed his free header and guided it wide.
Pakamisa, looking nervous everytime he had the ball, was the beneficiary of another pass from his captain Tawanda Muparati, but saw his effort go across the face of goal.
At the other end, Patson Jaure cleared off the line after goalkeeper George Chigova had been beaten by a Hardlife Zvirekwi effort.
In the second half, United poured forward but to no avail as Dynamos literally parked the bus and keeper Chigova frequently went down to waste precious seconds.
Kawinga, who had replaced the misfiring Pakamisa, troubled CAPS captain Tapiwa Khumbuyani on the left but the final ball was missing.
United then had two penalty appeals waved away by referee Thomas Massa – first when Cliff Sekete handled inside the box in the 69th minute and later when Nyamandwe went down in a goalmouth melee inside the box.
The match, though, ended in ugly scenes. The referee added three minutes of injury time, but Dynamos substitute Clive Kawinga feigned injury at the corner provoking a rain of missiles from United fans.Advertisement

Two more optional minutes were added after play was interrupted as United fans threw cabbages and vegetables onto the pitch. Machapa, in the process of trying to take a throw-in in for Dynamos, was hit by a missile.
With the win, Dynamos moved to 41 points, two ahead of Harare City who conceded a late goal as they drew 2-2 against Triangle at Gibbo. Third-placed Highlanders are now four points adrift of the leaders after losing 1-0 to How Mine at Barbourfields.