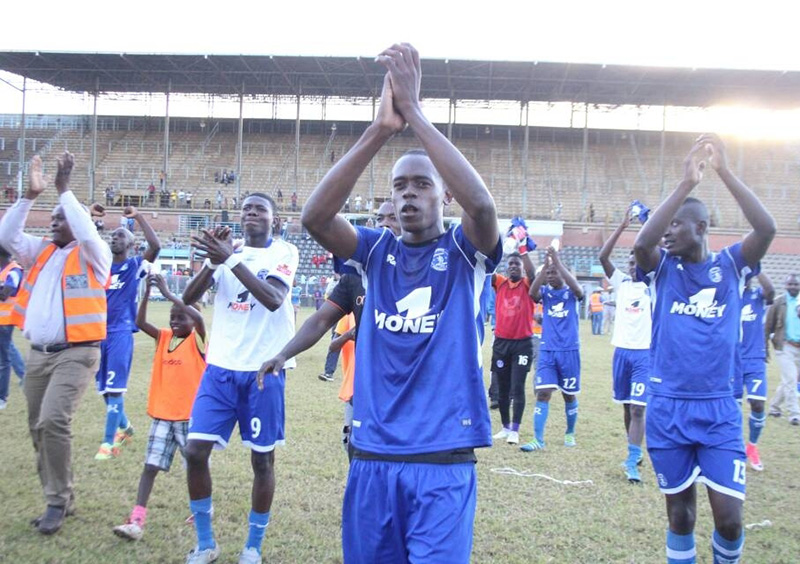 Machazane appeared to use his hand to direct substitute Emmanuel Mandiranga’s corner kick delivery into the back of the net in stoppage time as the match appeared headed to end in a stalemate.

Harare based referee Josiah Masimira, who had to be escorted from the field of play by the police and Dynamos security marshals after the match, bafflingly allowed the goal to stand despite fierce protests from the Rhinos players, who at one point threatened to walk off the pitch in protest.

Right back Tapuwa Sibanda looked to have secured a point for the soldiers with a well taken free kick nine minutes from fulltime to cancel out Valentine Kadonzvo’s 24th minute goal for Dynamos.

The win moved Dynamos to 11th position on 37 points, five clear of Nichrut, who occupy the last relegation spot.

There was however, no such luck for Shabanie Mine, who became the first team to be relegated from the Castle Lager Premier Soccer League after succumbing to a 1-0 defeat against Harare City at Maglas Stadium on Sunday.

Rooted at the bottom of the log with only two wins this season, Shabanie Mine needed a win to enhance their already slim chances of survival but suffered another loss which left them 15 points behind 14th placed Chapungu with only four games to go.

Tatenda Tumba scored the solitary goal for the Sunshine Boys in the 84th minute to punish Shabanie, who had wasted a chance to take the lead in the first minute when Joseph Sibanda’s penalty kick was saved by the visitors’ goalkeeper Ryan Harrison.

Elsewhere relegation-threatened Bulawayo City were left to fight another day after coming from a goal down to upstage Bulawayo giants Highlanders 2-1 at Barbourfields.

Bulawayo City, who could have been relegated if they had lost the game, found themselves a goal down in the seventh minute after Tendai Ndlovu heading in a corner kick to put Bosso in front.

The minnows however, found the equaliser in the 46th minute through Ozias Zibande surprisingly going in front in the 68th minute courtesy of Sipho Ndlovu’s goal.

The victory put Bulawayo City in the 16th position with 22 points, the same number of points as fellow relegation candidates Mutare City Rovers, who lost 2-0 to Yadah FC at Vengere.

Meanwhile, Herentals confirmed their safety with a shock 1-0 defeat of Triangle United 0-1 at Gibbo Stadium which lifted them to 11th position on the log on 41 points. 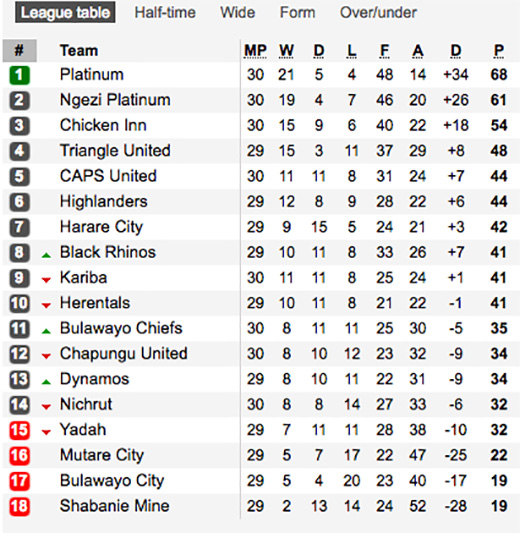 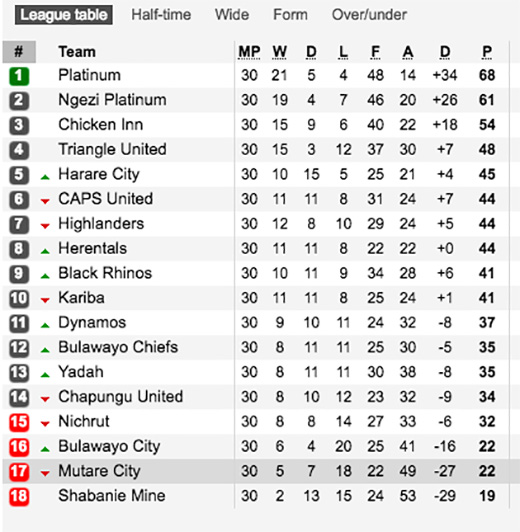