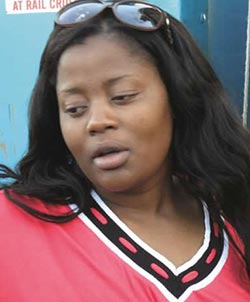 SUNGURA King and Extra-Mberikwazvo frontman Alick Macheso faces another court battle after his estranged second wife Tafadzwa Mapako took her fight for US$7000 maintenance to the High Court.
Mapako, also known as Fortunate, filed a notice of appeal Tuesday against a civil court ruling ordering Macheso to pay $1030 as monthly maintenance pending paternity tests on their two young children last week.
Last month she demanded $7,130 but this was turned down by civil court magistrate Tafadzwa Muvhami who granted her just over $1000 effective May 31 until the results of a paternity evaluation.
Macheso doubts he is the children’s biological father.
Mapako now wants Muvhami’s ruling overturned, arguing the Sungura maestro can afford her envisaged lavish lifestyle.
“The court erred both at law and fact in (when) making a finding that the appellant (Mapako) failed to justify her claim of $7130 per month as maintenance for herself and the two minor children.
“….The appellant attached supporting evidence to the answering affidavit like supporting affidavits, utility bill statements and medical opinions which were not challenged or rebutted by respondent (Macheso),” Mapako said in her appeal.
She further argued that the Civil Court could have granted the costs for hiring a driver, motor vehicle service and insurance allowance for her vehicle.
“The court erred when it made a finding that Mapako does not need a driver, motor vehicle service and insurance allowances, yet the same court correctly made a finding that she does not possess a driver’s licence and that she owns a motor vehicle for which the same court awarded the appellant fuel allowance of 20 litres per month with the equivalence of $30,” the lawyers argued.
Mapako also argued that she should never have been forced to contribute to accommodation costs because she is unemployed.
Problems that led the two to divorce, according to Mapako began late last year when Macheso allegedly inserted his manhood into his sick child’s mouth, saying that would heal fontanel (nhova/ inkanda) problem.
The singer is alleged to have claimed that it was a traditional rite but Macheso denies the allegations claiming they are part of her campaign to tarnish his image.Advertisement