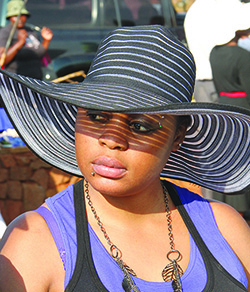 SHARON Macheso’s husband, Kudakwashe Munetsi, has abandoned his application for discharge in his domestic violence case, saying he wants a chance to reveal more details pertaining to the breakdown of their marriage.
Munetsi was supposed to file his discharge application on Wednesday with magistrate Tavonga Mutetwa expected to make his ruling on Monday next week.
Contacted to comment on why he had set aside the application, Munetsi, through his lawyer, Charles Chikore of C Mutsahuni Chikore and partners, said he had decided to go straight to the defence case since he wanted the public to know the cause of their differences with his wife.
“I feel my client has so many things to say, so we have written a letter to the court advising of our abandonment of our intention to apply for discharge,” he said.
“He can only get the opportunity to speak when put to his defence. We feel given the public interest this matter has attracted, it would appear as if we are afraid of saying out our side.”
Chikore added: “Complainant (Sharon) has been saying her side of the story and she said bad things about the accused, hence it’s good for him to clear his name.
“The public and the court need to know that he is not what was being portrayed.”
Munetsi, who is being charged for contravening a section of the Domestic Violence Act, said it was Sharon who forced the breakdown of their marriage.
He said Sharon was violent and was possessed by a spirit which she tried to pacify using snuff.
But Sharon accused Munetsi of assaulting her and of having suicidal tendencies.
Prosecutor, Gayton Vhiriri, closed the State’s case after calling two witnesses, including Sharon’s aunt, Mary Mutore, who revealed that the pair’s marriage was riddled with squabbles from the onsetAdvertisement