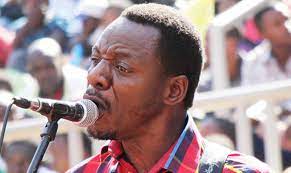 SUNGURA maestro, Alick Macheso, is set to descend on the Ancient city of Masvingo as he continues with his whirlwind tour of the new album this Saturday.

Music lovers will be in for a good treat as Macheso and his Orchestra Mberikwazvo band sample songs from his latest offering, Tinosvitswa NaShe.

Extra Basso, as he is affectionately known by his legion of fans, is expected to deliver a soothing performance being a seasoned band front-man.

Events organiser, Rudo Shoko of Lulu Events,  told NewZimbabwe.com that they are ready for the ‘big event,’ saying preps are well on course.

“It’s all going according to plan, we are going to host a big artist, so the event will definitely be big. All is in order,” Shoko said.

Revelers are looking forward to ending the winter season in style.

Macheso could not be drawn to comment as his mobile went unanswered until the time of publishing.

However, Macheso has a task to prove why he is regarded as the Sungura King after some sections of the genre’s fan base began to equate him to Mark Ngwazi, who has also dropped a new album.

Ngwazi is riding high with his seven track Nharo Nezvinenharo album, which has received fair airplay on various stations.