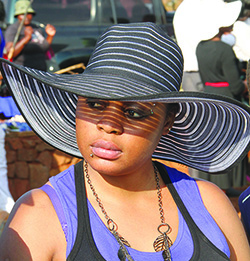 SUNGURA ace Alick Macheso’s daughter Sharon is on the verge of divorcing her husband of two months after a Civil Court magistrate granted her a protection order after claims of violence.
Kudakwashe Munetsi married Sharon amid pomp and ceremony but the union seems to have hit the rocks and the popular singer’s first born is now back at her parents’ home in Waterfalls.
Sharon, last week, approached the courts seeking an order barring her husband from visiting her claiming she had been physically and verbally abused by Munetsi who she also accused of being a “drug abuser”.
The magistrate granted the order.
In her founding affidavit Sharon said Munetsi’s violent behavior was a result of his abuse of “soft drugs and alcohol”.
“Barely a month into the marriage, the conduct of the respondent has been hostile towards me in that he has on several occasions’ perpetrated acts of physical violence as well as verbal assault on my person,” she averred.
“The underlying cause of the respondent’s behaviour is that he abuses alcohol and drugs, he has the penchant for drinking brocleer, he also smokes  cannabis and abuses amtriplin pills, after taking these drugs, he becomes violent and acts in an unbecoming manner.”
She argued that despite knowing that she was expecting their first child, Munetsi had gone on to assault her.
“The last straw happened on 12 October 2014 after he had spent most of the day drinking alcohol, I confronted him about his behaviour to which he unleashed verbal abuse on me, he clearly put it across that he wanted to drag the name of Macheso (the singer) into the mud and he also demanded money claiming that we had spent a lot of money renovating the house which was donated to me as a wedding gift by my parents.
“He then went on to physically assault me using open palms, fists and booted feet whilst I lay helplessly on the floor, the most despicable thing is that he directed his assault on my abdomen when he fully knows that I am pregnant.”
In response Munetsi accused his wife in infidelity claiming she was in the habit of going on late nights out.
The assault case is currently going on at the Harare Magistrates Court.
Sharon added that she feared for her and their unborn child’s life while Munetsi was suicidal and at one time had threatened to kill himself with a kitchen knife “if she did not return home”.Advertisement

“My life, body and limb are now at stake, because of the violent conduct of the respondent. I have also been psychologically affected by his conduct as such there is need for a protection order in the present case because of the violent nature of the respondent.
“My prayer before this court is to grant me an order in following terms-the respondent be and is hereby interdicted from assaulting me physically and verbally and that he is barred from visiting me at number 60th Drive, Parktown, Waterfalls,” she said.
Norman Mugiya of Mugiya and Macharaga Law Chambers is representing Sharon.
Sources said Sharon would soon demand a divorce because the union was now “irreparable”.