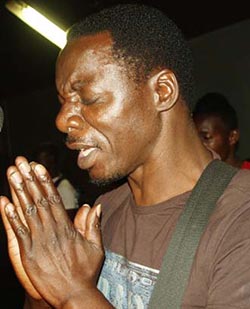 ALICK Macheso has been hit with a US$7,000 maintenance claim by estranged second wife, Tafadzwa Mapako, as the bickering couple finalise their bitter divorce.
Tafadzwa filed the claim through lawyers Hamunakwadi, Nyandoro and Nyambuya on April 28 and the case has been set down for hearing at the Harare Civil Court on May 13.
She said she needed the money for her own upkeep as well as to look after the couple’s two minor children adding the family wanted to continue the luxury lifestyle to which they had become accustomed.
In her founding affidavit, Tafadzwa stated that: “The respondent has neglected me and the children since December 2013 and has not been supporting me and the minor children of the marriage.
“My children are used to a high standard of living, which the respondent had introduced into their life, which I expect the respondent to continue.
“The respondent is in a position to pay maintenance in the sum of US$7 130 per month.
“He is a renowned sungura musician, who earns high income from shows, sponsorships, and international tours…”
The $7,130 would cater for the following requirements:

Groceries to the tune of US$1 500 per month
US$300 for a housemaid
US$300 for the gardener
Clothing allowance of US$600
US$300 for fuel allowanceUS$450 monthly for a driver
US$600 vehicle allowance and servicing
US$750 for medication of her family
US$550 for extra- curricular activities
US$400 monthly for hair and beauty therapy
US$200 Telephone and,
US$1,100 for monthly rent, water and electricity bills

Tafadzwa said she had not worked over the four years she was married to Macheso after allegedly being told not to bother by the star.
“I am currently not employed as the time I was living with the respondent, he denied me going to work stating that he would provide anything that I needed and that he would also take care of our children,” she said.
The two children also suffered from ill-health and required special and regular medical attention, she added.
“Alick Macheso Junior has been very sick of late and needs medical treatment,” she said.
“He is asthmatic and anaemic and the doctor has recommended that he should be tested for sickle-cell and cancer, pneumatic anemia of recurring infection.Advertisement

“I also have to state that Allexin Macheso is still an infant and requires consistent attention of a paediatrician coupled with clinical infant requirements.”
Her lawyers also denied reports claiming Tafadzwa failed to attend scheduled paternity tests for the children.
“Our client instructs us that she is willing and more than ready to go for DNA paternity tests,” the lawyers said.
“She prefers the DNA tests to be done through the Blood Transfusion Service of Zimbabwe as she stated in our earlier meeting.
“Kindly advise us when you have booked for an appointment at the Blood Transfusion Service of Zimbabwe so that she can attend the same.”