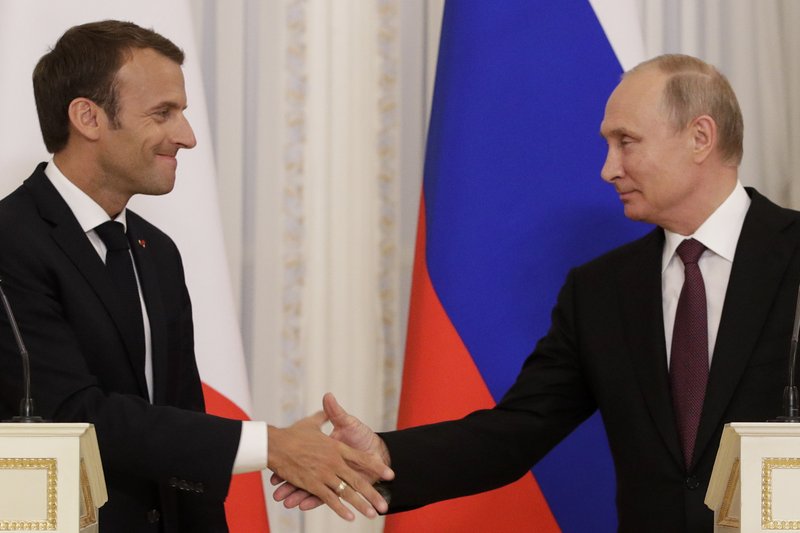 In a press conference following the leaders’ wide-ranging first meeting in Russia, Putin also said he regretted US President Donald Trump calling off his plans for a summit with North Korea’s Kim Jong Un.

“We had counted on that a significant step towards a de-escalation on the Korean peninsula would be taken and a start made on denuclearisation,” Putin said.

Trump announced Thursday that he would not go ahead with the meeting with Kim set for June 12 in Singapore, and would instead pursue Washington’s campaign of “maximum pressure” through sanctions on Pyongyang.

Meanwhile, Macron said he wanted the “non-proliferation process to continue” and hoped Trump’s decision was just a blip.

Trump’s earlier withdrawal from the Iran nuclear agreement had provided another rare point of convergence for Moscow and Western capitals, with both Macron and Putin reaffirming their commitment to the deal.

The ongoing crises in eastern Ukraine and Syria, where Russia and France have intervened on opposing sides of the conflict, were less comfortable topics for the two leaders.

Nevertheless, the French president said he “respected the strengthened role Russia has taken on in the region and in the world, in particular the Middle East”.

“I expect that Russia will respect also our interests, our sovereignty and that of our European partners,” the French president added.

Before the press conference, ministers from France and Russia celebrated a raft of commercial deals between the two countries.

The most significant of these was a deal that will see the French energy group Total increase its role in liquefied natural gas projects in the Arctic with Russian firm Novatek to the tune of $2.5 billion.

The trip is Macron’s first to Russia as president and follows a visit by German Chancellor Angela Merkel last week. Europe and Moscow are making diplomatic overtures to save the Iran deal, now under threat after the recent US withdrawal.

Putin handed Macron’s wife Brigitte flowers as he greeted the couple late in the afternoon at the Konstantin Palace, a former residence of Peter the Great set some 20 kilometres (12 miles) outside Saint Petersburg.

The meeting comes almost exactly a year since the freshly elected Macron hosted Putin in Versailles, when the French leader accused Russian media of producing “lying propaganda” during a joint press conference.

The talks take place after US President Donald Trump in early May controversially pulled the United States out of the 2015 landmark pact with Iran that placed limits on its nuclear programme in return for easing economic sanctions.

“Russia shares the position of the majority of the international community including Western leaders” when it comes to the Iran deal, said Alexander Baunov of the Carnegie Moscow Center.

The West has realised that a dialogue with Putin is “inevitable” in order to preserve the accord, he said.

Japanese Prime Minister Shinzo Abe will also visit Russia at the end of the week.

“Merkel and Abe have already begun a thaw with Moscow and Macron is scared of losing the advantage that France has always had with Russia,” Baunov added.

International investigators on Thursday said a missile that downed a Malaysia Airlines flight over eastern Ukraine in 2014 belonged to a Russian brigade. Moscow rejected the accusation.

Before Macron’s trip, Human Rights Watch also implored him to raise the issue of rights abuses with his Russian counterpart, following a crackdown on dissent and pressure on minority groups in the country.