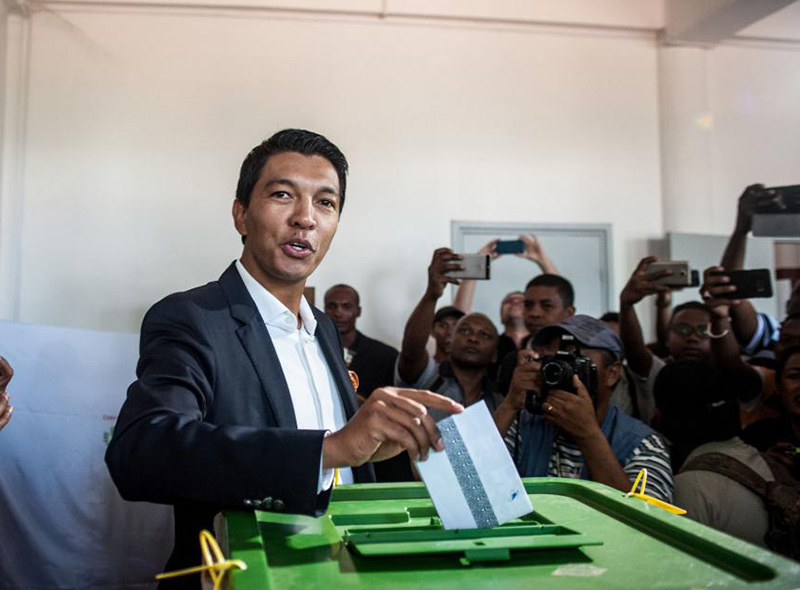 Andry Rajoelina, who returned to the helm of Madagascar after last week’s hotly-contested election, is one of three politicians to have dominated the politics of the Indian Ocean island nation.

Nicknamed “the disc jockey”, a moniker he earned from his popularity for promoting parties in the capital Antananarivo, Rajoelina burst onto the political scene 11 years ago.

He trounced the party of then President Marc Ravalomanana to become the capital city’s mayor in 2007.

Helped by his own Viva broadcasting channel and strong communications skills, he quickly established himself as the leading voice of opposition to Ravalomanana.

His supporters openly defied the regime with the tacit support of the military, who helped oust Ravalomanana in 2009.

The 44-year-old Rajoelina defended his elevation to the presidential palace on the back of a coup, telling AFP: “It was a popular uprising.”

At the time, Rajoelina, who was then in his mid-30s, struggled to guide the country out of crisis as its unelected leader.

His rivals also accused him of corruption, greed, and turning a blind eye to the pillage of the country’s natural resources, including its precious rosewood forests.

His failings won him the nickname “crayfish” – a crustacean that walks backwards.

Under international pressure, Rajoelina did not contest the 2013 election and backed his victorious former finance minister Hery Rajaonarimampianina.

The two quickly fell out, however, and two years ago Rajoelina vowed to win back office at the ballot box.

Born on May 30, 1974 in Antsirabe, Rajoeliona- a businessman and fervent Catholic- is married with three children.

During the first round of the elections, he took a slight lead over Ravalomanana but has attracted impressive numbers to his rallies, which featured performance artists and fireworks.

Rajoelina has been energetic on the campaign trail, bringing a sense of excitement and change to his rallies.

But his policies have been criticised as unrealistic and foes have questioned how he funded his lavish campaigning.

Among promises that drew ridicule from rivals were a proposal to fit prized zebu cows with trackers to battle rustling, and a scheme to convert Tamatave port into a “Malagasy Miami”.

But Rajoelina has dismissed his critics and vowed to transform his deeply impoverished country.

“The situation is catastrophic in Madagascar, I would like to give people hope and pride,” he said.

“I will be a president of the poor people who protects the poor.”