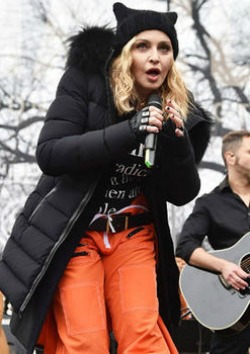 MADONNA beamed with pride as she attended the opening of a new children’s wing at a hospital in Malawi funded by her charity – Raising Malawi.
The singer, 58, was joined in the city of Blantyre by her adopted children Stella, David and Mercy– who the new wing is named after.
The American pop queen unveiled a plaque on the wall of The Mercy James Institute for Paediatric Surgery and Intensive Care at the city’s Queen Elizabeth Central Hospital.
She gave Mercy a big hug, planted a kiss on Stella’s forehead and affectionately nuzzled into David’s neck during the opening ceremony.
Madonna wore a vibrant floral skirt for the occasion with a black cardigan and a series of gold bangles.
The new wing has taken two years to build and contains three operating theatres and a 50-bed ward.
It’s the first specialist health unit for children in Malawi, doubling the capacity for paediatric care at the hospital.
Just a last month she splashed out millions on a Portuguese home so her son David can ­further his football career.
The singer has been house-hunting ever since her 11-year-old lad started training with Benfica football club’s junior team.
She is thought to have coughed up £5million for an 18th Century “palacete” (aka mansion) in a hilltop town not too far from the club’s training ground.
A source said: “Madonna visited Portugal first in March and the fans went wild.
“One even sent her a message saying they were an estate agent on Instagram and she started following them back. It was then it became pretty apparent that she was looking to make a move ­permanent.
“Now the town in question is abuzz with the news that she’s going to be based in this particular property, with the estate agents confirming they’ve sold the property to a big name.
“It’s a stunning building in the hilltops with a huge number of bedrooms and bathrooms all ­decorated in striking Islamic style, although there are huge plans for a redesign inside already.”Advertisement