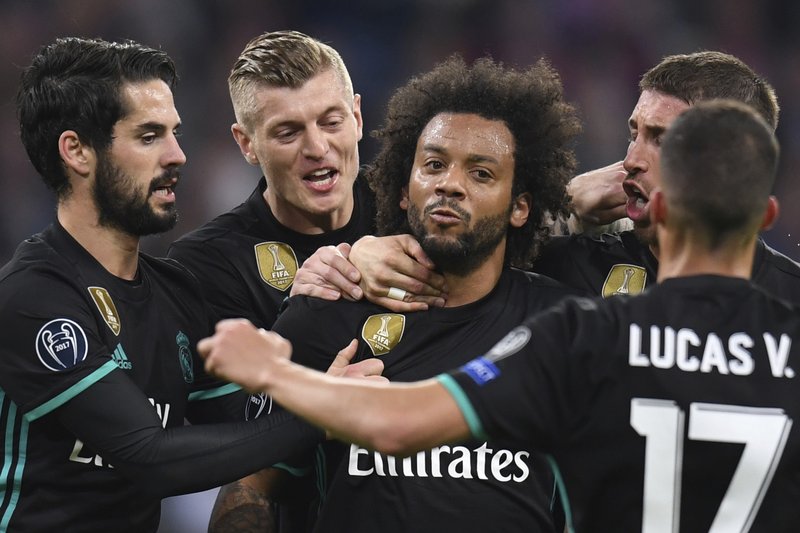 The Portuguese star did beat Bayern goalkeeper Sven Ulreich with a spectacular effort in the second half, but what would have been his 16th Champions League goal of the campaign was ruled out for using his arm to control the ball.

Instead, Madrid relied on Marcelo and halftime substitute Marco Asensio to produce a comeback after Bayern had gone in front through Joshua Kimmich.

Marcelo equalized before the interval against the run of play and Asensio then combined with Lukas Vazquez to claim a second away goal for Madrid 12 minutes into the second half.

The result puts the two-time defending champions in a favorable position before the second leg in Madrid next Tuesday, though Zinedine Zidane’s side will be wary after conceding three goals at home to Juventus in the previous round.

“We’ve taken the first step,” said Madrid captain Sergio Ramos, back to marshal his side’s defense after serving a suspension against Juventus.

Bayern had to substitute the injured Arjen Robben and Jerome Boateng in the first half, but the side had plenty of chances to score more goals with Franck Ribery, Robert Lewandowski and Mueller all missing good opportunities.

“We didn’t have as many big chances against Hannover last week. Real won 2-1 away, so they have the edge, but we’ll throw everything into it,” Kimmich said of the second leg.

Bayern, which is chasing a treble in Jupp Heynckes’ last season in charge, was hoping to make up for last year’s quarterfinal exit to Madrid, and for the Spanish side’s 5-0 aggregate win at the same stage in 2014.

Roy Makaay scored the fastest Champions League goal after 10 seconds for Bayern against Madrid in 2007, and Mueller would have rivaled it had he been able to make more of a chance created by Lewandowski.

“There was a lot more possible,” Mueller said. “That hurts, but also shows that there’s something in the return game. We had to get a much better result. We were too naive.”

Rafinha had the first shot on goal in the 19th minute after a cautious start from the visitors, who started with both Gareth Bale and Karim Benzema on the bench.

Madrid started to settle midway through the half before Kimmich struck. James Rodriguez played the right-back through as Bayern created a three-on-two. Perhaps expecting a cross, Madrid ’keeper Keylor Navas was surprised when Kimmich let fly to score inside the far corner.

Buoyed by the goal, Bayern’s players suddenly found spaces but Ribery wasted a good opportunity to double the lead.

Instead, Marcelo leveled the score shortly before the break. Dani Carvajal headed the ball back into the danger zone, Ronaldo let the ball bounce, and Marcelo let fly with a low shot inside the bottom corner.

Bayern missed more chances before the interval, when Asensio came on for Isco to change the course of the game. After Bayern turned the ball over in midfield, Vazquez and Asensio played a one-two before the 22-year-old substitute coolly dispatched the ball past Sven Ulreich.

Navas pulled off a brilliant save to deny Ribery, who was again blocked by the ’keeper five minutes later. Mueller missed an even better chance minutes after that.

“The tie is far from over,” Zidane said. “It’s more than possible that Bayern could win in the Bernabeu.”