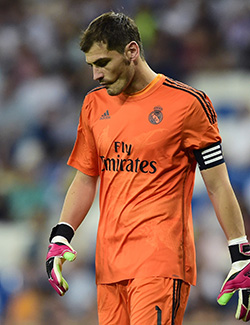 REAL Madrid president Florentino Perez insisted on Monday the club did not pressurise the club’s iconic goalkeeper Iker Casillas to leave after 25 years with them for FC Porto.
After a tearful farewell press conference by the captain on Sunday, Perez surprised reporters by summoning 34-year-old Casillas to appear alongside him and holding a tribute with fans at the Bernabeu stadium.
Following claims that Casillas had been shunted out the back door to make way for reported transfer target David de Gea of Manchester United, Perez said Casillas himself had asked for a transfer.
“We can only respect and accept that, because he has earned that right during 25 years at his boyhood club”, Perez said.
“No one in Real Madrid asked him to leave the club. A few days ago he received an offer from Porto which he told us of immediately and asked us to take it into consideration and make an agreement.”
However, the chances of De Gea coming to Real looked remote on Monday as he was included in the list of players departing for United’s pre-season tour of the United States.
Casillas said at an emotional press conference on Sunday that he was persuaded to leave by Porto’s “hunger” and the affection shown him by the Portuguese team.
On Monday however he alluded to the tough time he has had over the past few years at Madrid.
“I thank all the Real Madrid fans who have rallied round and supported me, and to those I have had disagreements with, I am truly sorry,” he said.
Casillas was reputed to be a conciliatory presence in the dressing room but was jeered by some fans during a period of internal tensions under combative former coach Jose Mourinho.
Spanish media have widely reported bad blood between Casillas and Perez but the two made a show of unity on Monday.
“There has been a lot of pressure on him the past two years, so although I would have liked him to finish his sporting career in our club, I have to accept his decision,” Perez said of Casillas.
Casillas paid tribute to his fans before going out on to the field to pose in front of all the 19 trophies he has won with Real.
“It is only human for people to want to express themselves, but it is clearly in the past now,” Casillas said.
“I keep with me just the good parts, the best times I have had with the fans in this stadium.”Advertisement