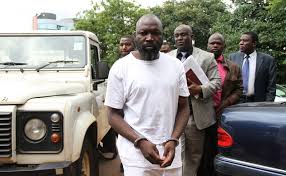 Chokurongerwa made headlines back in 2015 after he teamed up with his congregants to bash police officers who had visited his shrine in Budiriro to carry out some investigations.

He was convicted over public violence and was jailed five years in April 2015.

The sect leader seems to be off the hook now and is suing one Adelaide Hlabi, G Mutingwende for invading his land.

He cited the Ministry of Lands as third respondent.

“I submit that on the 6th day of May 2013 the ministry offered me land being a subdivision 6 of Lily in Zvimba in the district of Mashonaland West Province measuring 106, 25 hectares. I accepted the offer of the land,” Chokurongerwa said in his court application.

“I submit that ever since the ministry offered me land in Zvimba under the land reform and resettlement programme, I have undisturbed and peaceful possession of the land to which I hold personal rights towards.

“The first responded, Hlabi, has encroached into my plot and has started to evict all my employees from my plot.

“I submit that on June 20 2017 I wrote a letter to the ministry outlining my disgruntlement and grievances with Hlabi and Mutingwende. I seek the following relief by way of a declarator, that I be declared the sole owner of personal rights in plot 6 of Subdivision of Lily farm Zvimba,” he said.

He also wants Hlabi and Mutingwende to pay costs of suit.

“I continue to suffer irreparable prejudice due to the actions of both Hlabi and Mutingwende who decided to take the law into their own hands. I submit they have no basis at all to do as they please and continue and to unsettle me in my plot as they have done and continue to do. I have fill rights to the piece of land I occupy and should not therefore be displaced illegally,” Chokurongerwa said.