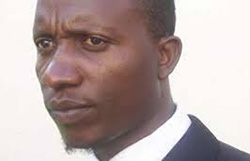 MDC-T prodigal son, Paul Madzore, has released a four track politically charged album titled ‘Nhimbe’ as part of Zimbabwe Yadzoka/Maibuye iZimbabwe’s project to mobilise voters ahead of the make or break 2018 elections.
In a recent interview with NewZimbabwe.com, Madzore said the title track Nhimbe was a clarion call for opposition political parties to come up with a formidable coalition that would take on the ruling Zanu PF party and its candidate, President Robert Mugabe, in power since independence from Britain in 1980.
“Nhimbe is a common term for an alliance or coalition used in our culture where people, especially in villages come together to accomplish a household job or task such as harvesting,” he said.
“So, I am very clear here. I am speaking to Zimbabweans ad urging them to come together and form an alliance or coalition to deal with this problem of leadership crisis. People must come together to remove this mad regime of Robert Mugabe.”
“People must come together; parties, churches, workers, vendors, war veterans and collaborators, students, civic society and families; we must all come together and put this Zanu PF dictatorship to rest,” he added.
Another song Kushanda neVanhu talks about partisan policing by the Zimbabwe Republic Police (ZRP), which Madzore accused of reaping off the poor while propping up Zanu PF instead of protecting the people.
“They (ZRP) sometimes ignore court orders, they beat up citizens all the time and on this they don’t refer to the constitution or their training at all,” he said.
“The law protects the people and we ask; on whose side are the police honestly when they go around beating up people pouring citizens that poisonous water with cannons, they endanger citizens with spikes daily.”
He said the song also spoke to traditional leaders, who he said should stand guard on fairness and be on the side of the people and desist from partisan food distribution.
On the track Ngozi Yebato, Madzore speaks about political violence, especially reminding youths that avenging spirits them and not the people for whom they perpetrate political violence.
“So, I speak to the youth and indeed everyone to stay clear of this spirit of violence. Violence has seen communities separate on political lines and it is bad.Advertisement

“When we get developed and civilized, you support what you want and I support what I want; not to erect bases to force citizens to support Zanu PF,” he said.
Zimbabwe Yadzoka leader, Victor Chimhutu, said music was one of their strategies to mobilise people and spread the message of change, noting the album was being well received.
“In Zimbabwe, we are giving the CD for free. However, I have uploaded it to internet stores, iTunes, Google play, Amazon, Spotify and others.
“We have printed 1000 hard copies so far but as you know music distribution is mostly electronic so we have already distributed thousands in WhatsApp and other forums,” he said.
Chimhutu said, however, that since Zimbabwe Yadzoka was mostly targeting rural areas, they will make sure they have as many copies as possible each time they took their campaigns to the rural communities.
This is the second project that Zimbabwe Yadzoka has done with Madzore having done the first one, Zimbabwe Yadzoka (Tikabatana Tinokunda) earlier this year, which featured anti-bond notes song Bond Hatidi/Musamanikidza Vanhu which became an instant hit.